NCERT Solutions for Class 10 English: Footprints Without Feet - Chapter 1 (A Triumph of Surgery)

Check NCERT Solutions for Class 10 English subject. In this article, we have provided solutions of all the questions of Class 10 NCERT Supplementary Textbook - Footprints Without Feet (Chapter 1: A Triumph of Surgery) 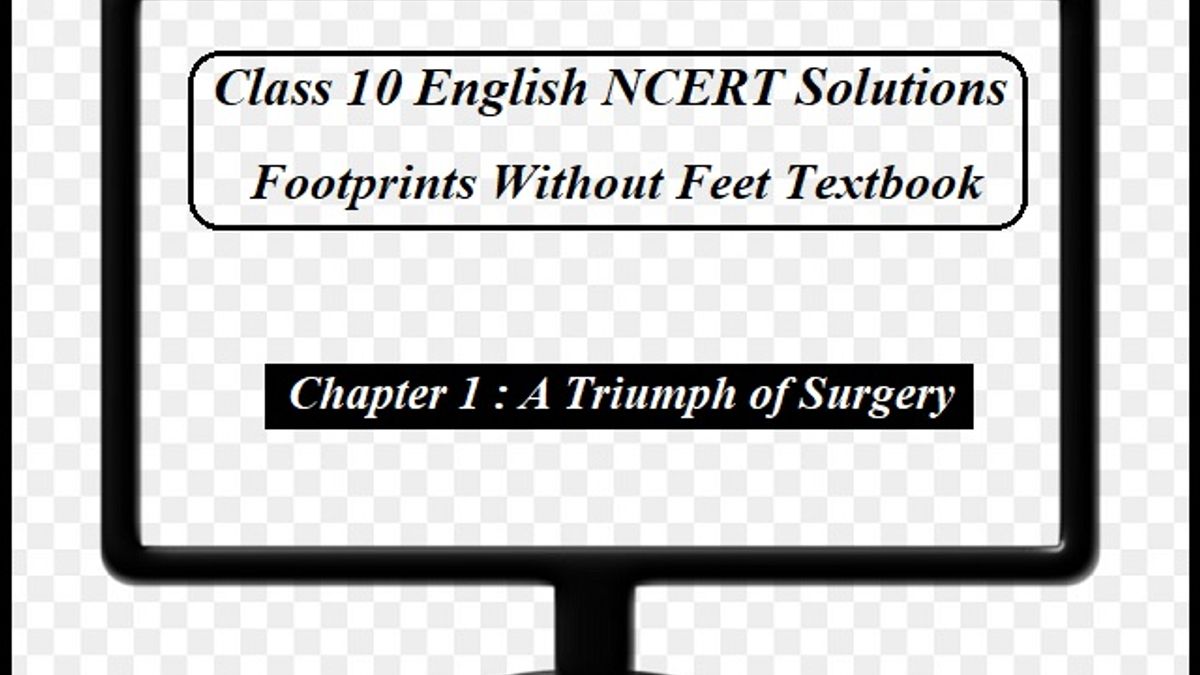 NCERT Solutions for Class 10 English: Footprints Without Feet - Chapter 1 (A Triumph of Surgery)

In this article, students can access NCERT Solutions for Chapter 1 of Class 10 English subject (Supplementary Textbook). The NCERT solutions have been provided after a detailed analysis of the marking scheme of CBSE by the subject experts. Chapter 1 of the Footprints Without Feet textbook is a story of a dog named Tricki and his mistress.  Class 10th students can study the answers provided here to score well in school as well as Class 10th board exams.

Ques: Why is Mrs. Pumphrey worried about Tricki?

Answer: Mrs. Pumphrey is worried about Tricki because he is unwell. He has refused to eat food and had bouts of vomiting. She feels that he is suffering from a serious health issue such as malnutrition.

Ques: What does she do to help him? Is she wise in this?

Answer: Mrs. Pumphrey starts giving him extra snacks like malt, cod-liver oil and Horlicks, apart from his main meals, to improve his condition. She also continues to satisfy his sweet tooth with cream cakes and chocolates. She does not give him any exercise, considering his listlessness as well. She is not wise in doing so because overfeeding Tricki is worsening his conditions instead of improving it. It has made him very fat and lazy.

Ques: Who does ‘I’ refer to in this story?

Answer: ‘I’ refers to the narrator, Mr. James Herriot, a veterinary doctor.

Ques: Is the narrator as rich as Tricki’s mistress?

Answer: No, the narrator is not as rich as Tricki’s mistress, Mrs. Pumphery. We can say so because the narrator seems fascinated by how lavishly Mrs. Pumphrey spends on the well-being and maintenance of her pet. He is unusually surprised by the enriching items she sends for Tricki, as he cannot afford them for himself.

Ques: How does he treat the dog?

Answer: James Herriot treats Tricki just like he would treat overweight and lazy dog, which Tricki is. He cuts down his food intake and keeps him under strict observation for the initial days at the hospital. He gradually increases Tricki’s food and sets him free for physical activities to improve his health.

Ques: Why is he tempted to keep Tricki on as a permanent guest?

Answer: Mr. Herriot is tempted to keep Tricki on as a permanent guest because of the good food and wine he is enjoying in Tricki’s name. He does not want to lose the luxurious inflow of fresh eggs, wine, and brandy.

Ques: Why does Mrs. Pumphrey think the dog’s recovery is ‘a triumph of surgery’?

Answer: Mrs. Pumphrey thinks that Tricki’s recovery is a triumph of surgery because his illness was very serious. She was of the opinion that there were very few chances of Tricki to improve and he needed immediate medical attention. Thus, his revival without any medicinal treatment was a great achievement, according to her.

Ques: What kind of a person do you think the narrator, a veterinary surgeon, is? Would you say he is tactful as well as full of common sense?

Answer: The narrator, a veterinary surgeon, is a capable and wise doctor. He handles Tricki properly which shows that he is sincere about his profession.

He does not operate upon the dog unnecessarily and cures him by altering his diet and activities.

He is a tactful person as he knew exactly how to convince Mrs. Pumphrey to hospitalize Tricki for a surgery. His decision to inform Mrs. Pumphrey to collect Tricki supports his sensibilities even though he was tempted to keep Tricki as a permanent guest.

Ques: Do you think Tricki was happy to go home? What do you think will happen now?

Answer: Tricki was happy to go back home as he really loved his mistress and the comfort of his lavish life. He didn’t have any friends at home like in the hospital, but he seemed equally excited at the sight of Mrs. Pumphrey. I think that Mrs. Pumphrey will now be careful about Tricki’s diet and health. She may also give him exercise daily as prescribed by the vet earlier.

Ques: Do you think it is a real-life episode or mere fiction? Or is it a mixture of both?

Answer: The story seems to be a mixture of both. It may be possible for rich persons to overfeed their pets due to love. It is not unusual for them to maintain a vast wardrobe for them either. But it is unlikely for a veterinary doctor to go out of the way and lie in order to save an animal. It is also unusual for anyone to consume food which is given in the name of a pet’s health.

Ques: This episode describes the silly behaviour of a rich woman who is foolishly indulgent, perhaps because she is lonely. Do you think such people are merely silly or can their actions cause harm to others?

Answer: Mrs. Pumphrey’s actions had a harmful reaction to Tricki’s health. She was overparenting’ and overfeeding Tricki in the name of love. This worsened his condition to the extent that he had to be hospitalised. People like Mrs. Pumphrey are not just merely silly but their actions can definitely have dangerous consequences for others.

Ques: Do you think there are also parents like Mrs. Pumphrey?

Ques: What would you have done if you were in the narrator’s place?