Check NCERT Solutions for Class 5 English subject. In this article, we have provided NCERT solutions for all the questions of Class 5 NCERT Marigold Textbook - Unit 5

In this article, students of Class 5 can find NCERT Solutions for Unit 5 of the English subject. Class 5th students can study the answers provided here to score well in school as well as Class 5th school exams. These NCERT solutions have been provided after a detailed analysis of the marking scheme of CBSE by the English subject expert and will help students in inclusive learning.

Summary: Fred is a lazy frog. He does not want to do any work. His mother asks him to come and help her but he does not listen to her. He likes to sleep all the time. He does not open his eye even when a lady frog comes that way. ;

Ques: What did the frog do all day?

Answer: He slept all day.

Ques: Besides lazy, what other word can you think of to describe the frog?

Ques: Complete the sentences with reference to the poem.

(ii) When a lady frog hops by, he does not even

Answer: (i) be hard-of-hearing

Answer: No, I did not like the Frog’s behaviour.

Summary: Rip Van Winkle was a good-natured man. Everyone liked him. But he was very lazy. Once he went away into the hills where he found some short and odd-looking men. One short, old man gave Rip something to drink. After that, he (Rip) slowly fell into a deep sleep.

On waking up, he found that he was at the place where he had first met the old man. He looked around for his dog but he was nowhere. Then he began to descend the mountain to go back to his village. When he reached his village he found new people there. Neither he knew about them nor they about him. Meanwhile, Rip touched his chin and realized that he had grown a long beard. However, an old woman recognized him. She asked him where he had been for twenty long years.

Ques: Circle the correct meaning of the given words. You may need to use the dictionary. 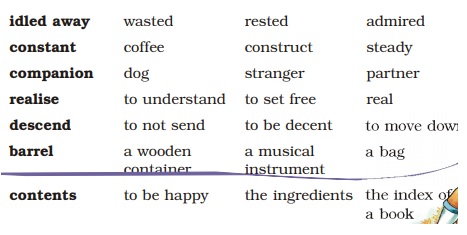 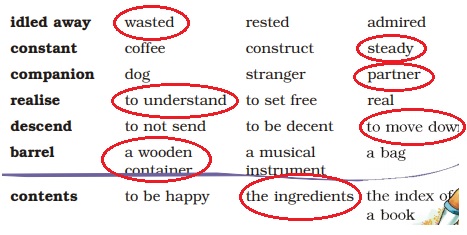 Ques: Match the words in the box with their meanings. You may take the help of a dictionary.

Ques: Say whether the following sentences are True or False.

(iv) Rip helped the old man on the mountains because he wanted to have a drink from the barrel. _________

(vii) Nobody recognised Rip when he came back because he had reached the wrong village. _________

Answer: (i) Rip’s village was situated at the foothills of Kaatskill mountains.

(ii) The children of the village loved him because he played with them and told them stories.

(iii) Wolk the dog was his constant companion.

(iv) The villagers stared at him because they could not recognise him.

(v) The old woman who recognised Rip was his neighbour.