NCERT Solutions for Class 7 Social Science Civics Chapter 6 - Understanding Media includes the best explained answers. All these solutions have been explained in the simplest manner and are provided with accurate details. We have provided here the NCERT solutions for all the exercise questions given in chapter 6 of latest NCERT Book for Class 7 Civics . All the NCERT Solutions are provided here in the readable and downloadable formats.

1. In what way does the media play an important role in a democracy?

Media plays an important role in a democracy in the following different ways:

2. Can you give this diagram a title? What do you understand about the link between media and big business from this diagram? 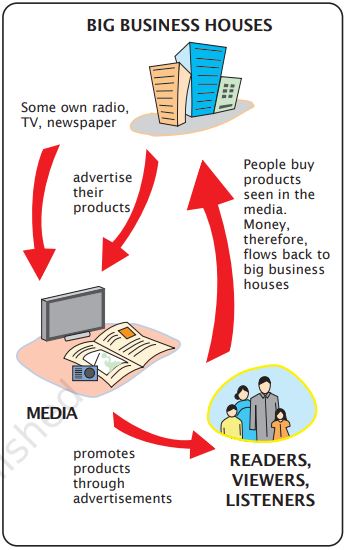 The given diagram can be titled as – “Media-Corporate Connection”.

From the following diagram, we can understand that big business houses and media have a strong connection. They work in a continuous loop.

Viewers, listeners and readers get influenced by the advertisements and buy the products. In this way, big business houses earn huge profits by promoting their products through media.

3. You read about the ways in which the media ‘sets the agenda’. What kind of effect does this have in a democracy? Provide two examples to support your point of view.

Media form the public opinion in a democracy. It can build up public opinion in favour of or against any issue. However, today the situation is different as the media has diverted from its real agenda. Now, it prefers to cover the stories which are in favour of those with great influence or those in power. Thus, the issues of real concern and are in the interest of the mass are ignored due the selective attitude of the media.

For example, drinking water is a major problem in the country. Every year, thousands of people suffer and die because of the unavailability of safe drinking water. However, we seldom find the media discussing this issue.

Another example is of a well-known Indian journalist writing about the Fashion Week that formed the front page headlines of all the newspapers while several slums were being demolished in Mumbai, the very same week, and this was not even noticed.

4. As a class project, decide to focus on a particular news topic and cut out stories from different newspapers on this. Also, watch the coverage of this topic on TV news, compare two newspapers and write down the similarity – and differences in their reports. It might help to ask the following questions:

(a) What information is this article providing?

(b) What information is it leaving out?

(c) From whose point of view is the article being written?

(d) Whose point of view is being left out and why?

Students are suggested to attempt this question on their own.

Download all the NCERT Solutions for Class 7 Civics Chapter 6 from the following link: