NCERT Solutions for Class 7 History Chapter 3 - The Delhi Sultans are provided here in PDF format. Check the easy and accurate answers for scoring high in the Social Science exam. 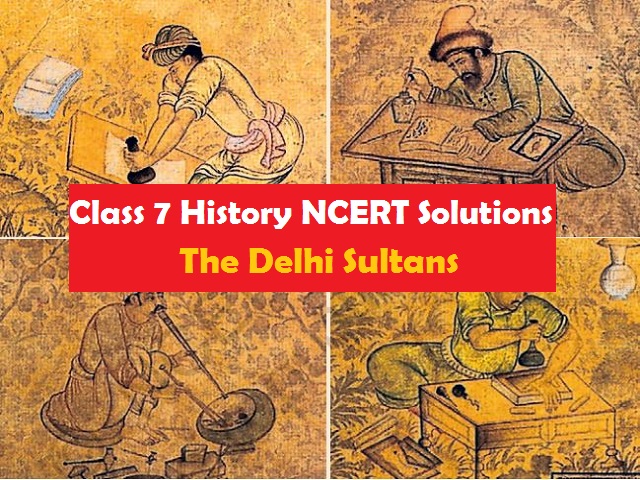 NCERT Solutions for Class 7 Social Science History Chapter 3 - The Delhi Sultans will help you in quick and effective learning thereby helping you perform well in your Social Science exam. We have provided here the thorough and precise answers to all the questions given in chapter 3 of the latest NCERT Book for Class 7 History. All the answers have been kept simple so that you can easily understand and memorise them.  All the answers are provided here in a readable and downloadable format.

Check below the NCERT Solutions for Class 7 History Chapter 3 - The Delhi Sultans:

1. Which ruler first established his or her capital at Delhi?

Ananga Pala from the Tomara dynasty of Rajputs first established his capital at Delhi.

2. What was the language of administration under the Delhi Sultans?

The language of administration under the Delhi Sultans was Persian.

3. In whose reign did the Sultanate reach its farthest extent?

The Sultanate reached its farthest extent during the reign of Muhammad Tughluq.

4. From which country did Ibn Battuta travel to India?

5. According to the “circle of justice”, why was it important for military commanders to keep the interests of the peasantry in mind?

6. What is meant by the “internal” and “external” frontiers of the Sultanate?

7. What were the steps taken to ensure that muqtis performed their duties? Why do you think they may have wanted to defy the orders of the Sultans?

In order to ensure that the muqtis performed their duties, their office was made non-inheritable. They were assigned iqtas for a short period of time and were transferred frequently.

The muqtis may have wanted to defy the orders of the Sultans because they did not like the conditions of service that were severely imposed on them..

8. What was the impact of the Mongol invasions on the Delhi Sultanate?

Mongol attacks on the Delhi Sultanate increased during the reign of Alauddin Khalji and in the early years of Muhammad Tughluq’s rule. This forced the Sultans to undertake a number of expensive protective measures.

Result of all these protective measures was the weakening of the Delhi Sultanate.

9. Do you think the authors of tawarikh would provide information about the lives of ordinary men and women?

No, the authors of tawarikh would not provide information about the lives of ordinary men and women because they lived in cities and were not in touch of the people living in villages. They mainly wrote in expectation of rewards by the sultan. They had nothing to do with common people.

10. Raziyya Sultan was unique in the history of the Delhi Sultanate. Do you think women leaders are accepted more readily today?

Yes, the women leaders are accepted more readily today. Actually, due to the spread of education, now people have started realising the potential of women. Not only in cities, but also in villages, women are being elected as Sarpanches and Councillors.

11. Why were the Delhi Sultans interested in cutting down forests? Does deforestation occur for the same reasons today?

The Delhi Sultans were interested in cutting down the forests because they wanted to give the cleared lands to peasants in order to encourage agriculture.
No, deforestation does not occur for the same reasons today. In fact, today the vegetation cover is being cleared for the housing of ever increasing population, urbanisation and industrialisation.

Download all the NCERT Solutions for Class 7 History Chapter 3 from the following link: