NCERT Solutions for Class 8 English - It So Happened Textbook- Chapter 10: The Comet II

Students of Class 8 can check NCERT solutions for English Subject It So Happened Textbook - Chapter 10: The Comet II 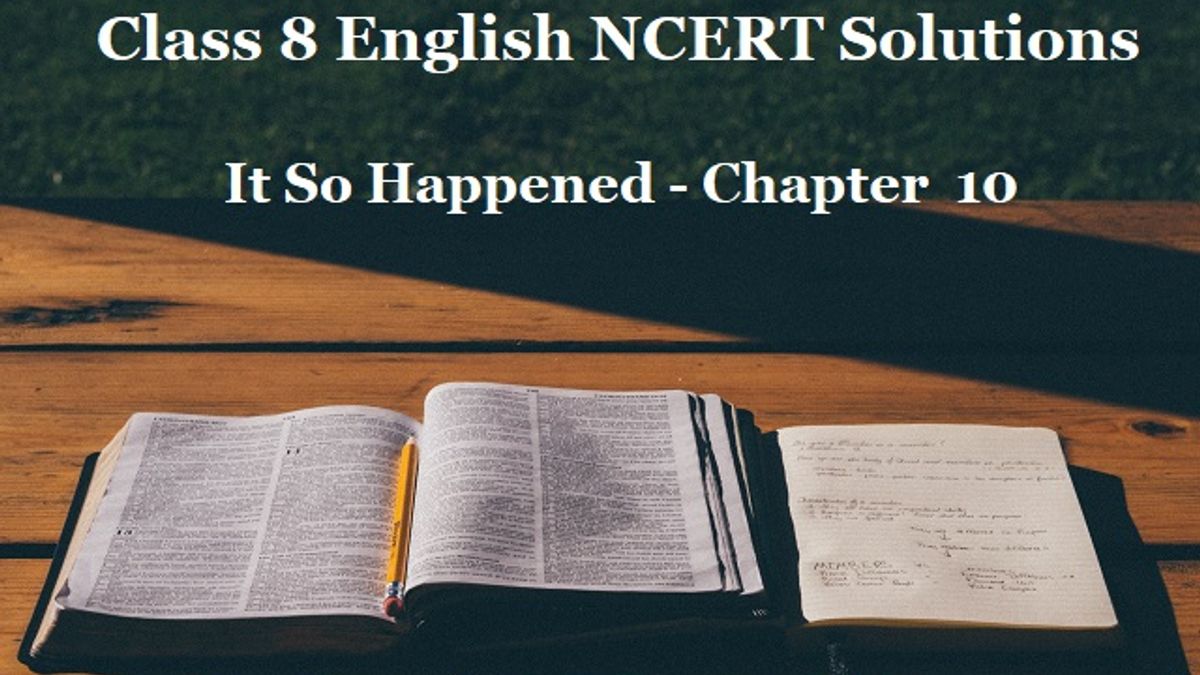 Check Class 8 NCERT Solutions for English Subject. In this article, we have provided NCERT Solutions for Chapter 10 from the It So Happened Textbook. Chapter 10 is a continuation of the story in Chapter 9 - The Comet I. The students are advised to read Chapter 9 before reading this chapter. The NCERT solutions of this chapter have been provided after a detailed analysis of the latest syllabus issued by CBSE. Students of Class 8th can study the answers provided here to score well in their school exams.

Ques: “For a moment James wondered if he had done his sums right.” Why was James doubtful about his sums and calculations?

Answer: James reached his hotel at 1 pm. He looked up from his window and saw the star-studded sky. He couldn’t believe that any untoward event could happen on such a peaceful night. He became doubtful about his calculations.

Ques: What did the scientists at the conference say about James’s ‘sums?

Answer: The scientists attending the conference came to the conclusion that James Forsyth’s calculations were correct. The new comet would collide with the earth.

Ques: Immediate action was needed, the scientists decided. Give one example each of ‘defensive’ and ‘offensive’ action mentioned in the text.

Answer: The approaching comet needed immediate action. The scientists had two options. The defensive measure was that the people should live in bunkers. The offensive action was to do something to deflect the comet from its path. This could be done by exploding a nuclear payload near the comet.

Ques: “I am not buying any Christmas presents till December 15”. What did Sir John mean by that?

Answer: Sir John was not quite sure about the safety of the earth. So he deferred the buying of Christmas presents till December 15. By that time the situation was sure to become clear.

Ques: What is Duttada expected to do on his return from London?

Answer: Duttada on the return was expected to take part in a Shanti yajna to pacify the evil spirit behind the comet.

Ques: What is his reaction to the proposal?

Answer: Duttada was very angry. He called it just a silly superstition to think that comets have ill-effects.

Ques:  What does “Project Light Brigade’ refer to?

(ii) What does Sir John say about the Project in his letter to Duttada in October?

Answer: (i) “Project Light Brigade’ refers to the plan to divert the comet from its path. The plan was to launch a spacecraft and explode the nuclear device near the comet.

(ii) The charge of the Light Brigade has begun. Let us hope for the best.

Ques: Did Sir John Buy Christmas presents on December 15? How did Duttada get to know about it?

Answer: Duttada got to know from the letter that Sir John had bought Christmas presents on Dec 15. It indicated that the Project Light Brigade was successful.

Ques: Why, according to Indrani Debi, had the comet not been disastrous? Do you agree with her?

Answer: Indrani Debi thought that Comet Dutta could not harm the earth because of the Yajna performed at their house. I don’t agree with this.

Choose the right word. Say why you think it right.

Answer: Duttada’s general outlook is rational because he had a scientific temper. He went by reason, not by custom or morality.

Ques: Should a scientist’s findings be suppressed if they seem disturbing? Give reasons for and against the topic.

Answer: No, the scientist tries to discover the truth, the factual position. His findings are based on thorough research. Hence, these should not be suppressed or ignored. Copernicus put forward the theory that the earth moves around the sun. He disproved the belief that the earth was the center of the universe. And he was right. But Galileo had to pay the price of telling a truth with his life. Let the truth come to light.

Ques: Do you think ours is a traditional society? What are some of the things we do to be called traditional? Do you find these things useless or useful?

Answer: Ours is a traditional and conservative society. It is because of the ignorance of the people. Our priests have full traditional beliefs in rites and rituals. We try to pacify the evil spirits and please God with offerings. These are futile and foolish practices.

Ques: Give two or three examples to show how science has been useful to us.

Answer: Science is pure knowledge, a ceaseless search to know the truth, and to make new discoveries. The research is a never-ending process. Science has made life comfortable and protected us from fire, floods, and diseases. If we misuse the discovery of atomic energy, it is our fault.

Ques: Give one example to show how science has been misused and has as a result been harmful to us.

Answer: Science discovered gun powder and hydrogen bombs, lethal gases, and other weapons of mass destruction. Instead of generating power from atomic reactors, we try to produce a bomb. Such misuse of science involves an enormous loss of life and property.