NCERT Solutions for Class 8 English - It So Happened Textbook- Chapter 2: Children and Work

In this article, students of Class 8 can check NCERT solutions for English Subject supplementary textbook (It So Happened) - Chapter 2: Children and Work 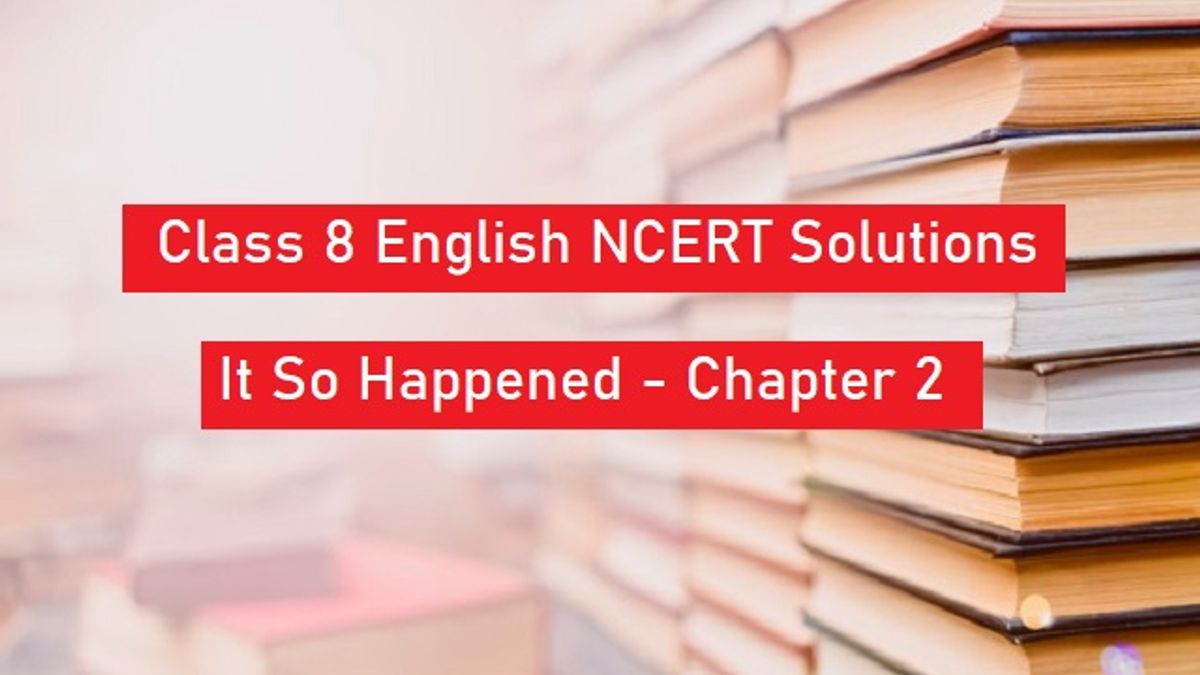 Check Class 8 NCERT Solutions for English Subject. In this article, we have provided NCERT Solutions for Chapter 2 from the English It So Happened Textbook. Chapter 2 is about an eleven-year old boy Velu who runs away from home and wanders around for hours before getting on a train to Chennai without a ticket. Tired and hungry, he doesn’t know where to go when a stranger at the station shouts a word of welcome. The NCERT solutions of this chapter have been provided after a detailed analysis of the latest syllabus issued by CBSE. Students of Class 8th can study the answers provided here to score well in their school exams.

Ques: 1. Velu stood on the platform but he felt “as if he was still on a moving train.” Why?

2. What made him feel miserable?

3. (i) Velu travelled without a ticket. Why?

(ii) How did he escape the ticket collector’s attention?

4. Why had Velu run away from home?

5. Why did he decide to follow the strange’ girl?

Answer:  1. Velu had run away from home. Being a small boy he was naturally tired, hungry, and afraid of the ticket examiner. He lay down near the compartment door. He could not get over the feeling that his train journey was over.

2. Velu was alone, tired, and hungry. He didn’t have a ticket also. So he felt miserable.

3. (i) Velu travelled without a ticket because he had no money.

4. Velu had run away from home because of the misdeeds of his father, who used to snatch all the money from him and his sister. He also beat the children.

5. Velu agreed to go after the ‘strange’ girl because he was hungry and the girl prom­ised to get food for him.

Ques: 1. Can Velu read Tamil and English? How do you know?

2. “If you are not careful, you will soon be counting bars there,” the girl said.

(ii) What does she mean when she says “If you are not careful.”?

(She says something a little later which means the same. Find that sentence.)

(ii)What did they get to eat?

Answer: 1. Velu could not read signboards in English. But he read the Tamil sign on the Central jail.

2. (i) She is referring to Central jail

(ii) She pointed out to Velu that doing wrong was not so important as escaping the police or getting caught.

3. The sentence is: ‘You don’t have to do anything. Just don’t get caught, that’s all’.

(ii) They got some food from the garbage bin. It was leftover food

(ii) Why does Velu find them strange?

2. What sort of things did Jaya and children like her collect and what did they do with those things?

3. Is Velu happy or unhappy to find work? Give a reason for your answer.

Answer: 1. (i) The ‘strange’ huts are made out of tin sheets, bricks, wood, and plastic.

(ii) Velu finds those huts strange because in his own village the huts were made of mud and palm leaves.

2. Jaya and other children like her collected paper, plastic, and glass, etc. They sold all that to kabaddi or junk-dealer.

3. Velu is not at all happy. He had never done such a dirty job in his village.

Ques: Is Velu a smart boy? Which instances in the text show that he is or isn’t?

Answer: No, Velu is not a smart boy. He runs away from his home to escape his father’s beatings. He felt miserable at the railway station. He found himself alone and hungry. He accepted rag picking because he wasn’t fit for any other job.

Ques: Do you think Jaya is a brave and sensitive child with a sense of humour? Find instances of her courage, kind nature and humour in the text.

Answer: Yes, Jaya is a brave and sensitive girl. She takes pity on Velu and gets food for him. She herself earns her livelihood bravely by collecting discarded material and selling them. She has a sense of humour also. She calls the ‘dirty trickle of water Buckingham Canal’.

Ques: What one throws away as waste may be valuable to others. Do you find this sentence meaningful in the context of this story? How?

Answer: Yes, the plastic, the paper, and rusty metal sheets thrown away by the people become valuable to ragpickers. They eat leftover food for survival. They sell junk food to some dealers to earn their livelihood.