There are 2000+ Peon, Sweeper, MTS & Other Posts vacant in Banks, Departments of Central & State Governments as per the updates from government. 10th pass can apply soon on or before the last date of application. 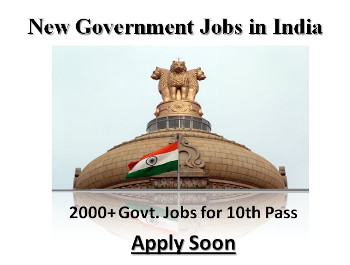 Two days left for year 2016 to end but while leaving it has given huge employment opportunities to 10th pass candidates. There are new govt. jobs for 10th pass added i.e., 2000+ Sub-Staff, Peon, Sweeper, MTS & Other Posts vacant in Banks and various Departments of Central & State Governments as per the updates from government job notifications. Take a look below for new jobs added to the list.

The vacancies are huge in number across India with large number of vacant posts available especially in Northern India. The number of job openings is 2000+ including the posts of Peon, Driver, Safaiwala, Cook, MTS, Subordinate Staff, Junior Office Assistant, Process Sever, Clerks and Others.

All those candidates who are interested and meet the eligibility norms set by the concerned organization can apply online to the post or in the prescribed format along with required documents on or before the last date of application.

After filling-in the application, list of candidates will be shortlisted after which the applicants will be required to follow the recruitment procedure to qualify for the job. Please note that the candidate applying for the post must be class 10th passed from recognized board/ institution.

So, Bang on to this immense opportunity and be the part of government organization. For more details, click on the link below of detailed advertisement.

MPSC Recruitment for 14 Peon & Other Posts, Apply at mpscmanipur.gov.in

NIFT Hiring for 29 MTS and Other Posts 2016, Applications Open till 30 Dec

Ministry of Defence Recruitment 2016 for 05 MTS Posts, Apply by 23 Dec

CCRAS is hiring for MTS, Driver & Other Posts