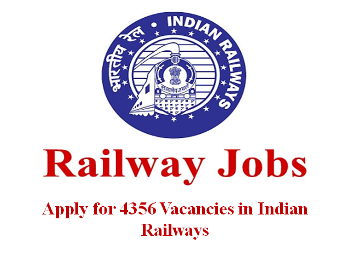 Indian Railways under Ministry of Railways has announced for 4356 vacancies of Trainee, Maintainer, Software Engineer, Assistant, etc under railway recruitment 2016. All those candidates who want to be a part of Govt Job and most importantly in Indian Railways job can apply for the posts through the prescribed format.

Railway job aspirants won’t be getting this opportunity later therefore, all candidates who are interested and fulfill the eligibility conditions set by Indian Railways can apply for the relevant posts. As per the latest updates, fourteen organizations/regions under Ministry of Railways are hiring candidates which includes: Central Railway, Noida Metro Rail Corporation, KRCL, Indian Port Rail Corporation, West Central Railway and many more.

Indian Railways is hiring for the posts of Apprentice, Maintainers, Assistant Software Engineer, Accounts Assistant, GM, AGM, Trade Apprentice, Senior House Surgeon, Trainees, Sr. Technical Asst,  Project Engineer, Sportspersons, Registrar, Engineer, Assistant, Assistant Officer and many other posts. This is a golden opportunity so all those candidates who are willing to apply must not give a second thought to it.