SANSAD ’20: Speak Up! The world will know

The MUN Club of VIT-Bhopal conducted its first Online National Level Parliamentary Debate, on 19th and 20th May 2020. The event was named as SANSAD’20. 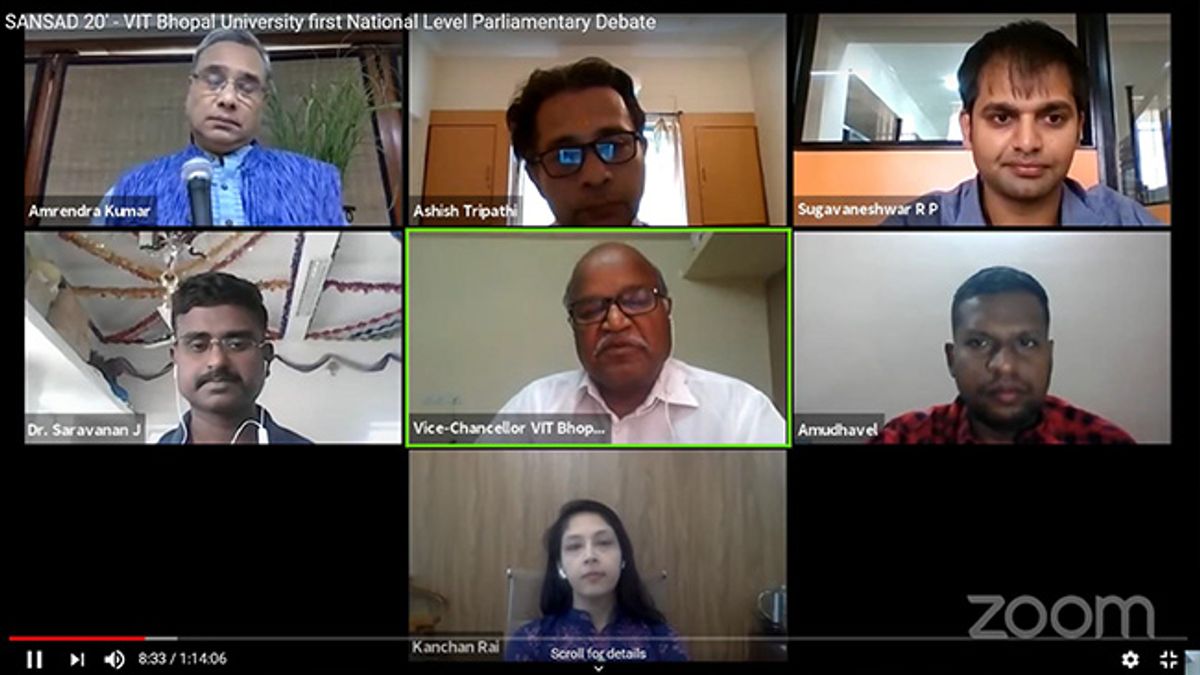 SANSAD ’20: Speak Up! The world will know

The MUN Club of VIT-Bhopal conducted its first Online National Level Parliamentary Debate, on 19th and 20th May 2020. The event was named as SANSAD’20.The inaugural ceremony took place in the presence of VIT-Bhopal’s, Vice Chancellor Mr P. Gunasekaran.

Mr Rajiv Chandran, Officer-in-Charge, UN Information Centre for India and Bhutan was the chief guest for the inaugural ceremony. Mrs Kanchan Rai, Director-Rai Corporations, Founder-Let US Talk Organization was the guest of Honour. Mr Saravanan played an active role in the faculty coordination and Mr R.P.Sugavaneshwar was the Master of Ceremonies (MoC).
The overall management of the event was handled by Management: Mr Amudhavel.

The Chief guest and the Guest of Honour were formally introduced at the beginning of the ceremony which was followed by a brief introductory speech by Dr.R.P. Sugavaneshwar and VC Dr Gunasekaran on the merits of VIT –Bhopal. Guest of Honour Mrs Rai and the Chief Guest Mr Rajiv Chandran shared their optimistic view of utilising the lockdown period in a productive manner and utilise this time to do something constructive.

After the speeches by dignitaries the main objective of the event “ The Parliamentary Debate: The Most competitive Debate “was introduced by MoC, Mr R.P.Sugavaneshwar. Also he explained about the rules and about the prizes that will be given away to the winners.

Disclaimer: The information provided in this Notification is solely by VIT-Bhopal University. Jagranjosh.com bears no representations or warranties of any kind, express or implied, about the completeness, accuracy, reliability, suitability or availability with respect to the information. Individuals are therefore suggested to check the authenticity of the information.