The pattern of these puzzles is almost similar to the Puzzle asked in first slot of SBI PO Prelims 2016 held on 2nd and 3rd July. It is noticed that maximum number of question are asked on Puzzle problems from reasoning section.

SBI is all set to conduct the next slot of preliminary examination for the recruitment of Probationary officer (PO) post on 9th and 10th July.

The expert team of jagranjosh.com has come up with Practice set of Puzzles with Answers and explanation for the SBI PO prelims exam 2016. The pattern of these puzzles is almost similar to the Puzzle asked in first slot of SBI PO Prelims 2016 held on 2nd and 3rd July. It is noticed that maximum number of question are asked on Puzzle problems from reasoning section. 20 problems in 5 sets are based on Puzzle in the examination.  Candidates can attain expertise in this type of questions through adequate practice.

Directions (1 - 5): Study the following information and answer the questions given below:

1. Who is sitting second to the right of W?

2. How many persons are sitting between Z and U when counted from the left side of Z?

3.  Which of the following statements is true regarding Z?

a) The one who is second to the right of Z is a female.
b) Z is facing the centre.
c) Z is a male.
d) The immediate neighbours of Z are facing outside.
e) None is true

5. If all the friends are asked to sit in an alphabetical order starting from S in an anti clockwise direction, the positions of how many will remain unchanged (excluding S) ? 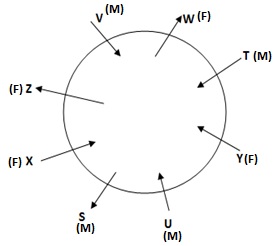 Directions (6-9) Study the following information to answer the questions.

Twelve people are sitting in two parallel rows containing 6 people each, in such a way that there is an equal distance between adjacent persons. In row-1, six girls are sitting - Priya, Leena, Ridima, Sonal, Teena, and Usha are seated and all of them are facing south. In row-2, six boys are sitting - Amit, Girish, Chetan, Dev, Ehaan and Farruk are seated and all facing north. Therefore in the given seating arrangement each member seated in a row faces another member of the outer row.

6. Who amongst the following sits at the extreme ends of the rows?

7. Who amongst the following faces Sonal?

8.  How many persons are seated between Usha and Ridima?

Directions (10 - 13) Study the following information to answer the given questions:

A commercial space has seven floors numbered one to seven, in such a way that the ground floor is numbered one, the floor above it, numbered two and so on such that the topmost floor is numbered seven. One out of seven companies have their corporate offices on each floor viz. T, U, V, W, X, Y and Z  on each floor. Company T has office on fourth floor. X on the floor immediately below Y’s floor. Y does not on the second or the seventh floor.

Company V does not on an odd numbered floor. U does not have office on a floor immediately above or below V’s floor. W does not on the topmost floor. Z does not on any floor below X’s floor.

10. Which company has their corporate office on topmost floor?

11. Which company have their office immediately above T’s floor?

12. How many floors are between V Company’s office and U?

13. Four of the following are alike in a certain way and so form a group. Which is the one that does not belong to that group?

Directions (14-17) Study the following information to answer the given questions:

14. Which of the following combinations is correct?

15. Which of the following group of students study in finance department?

16. U study in which institute?

17. Which of the following have their specialisation in HR?