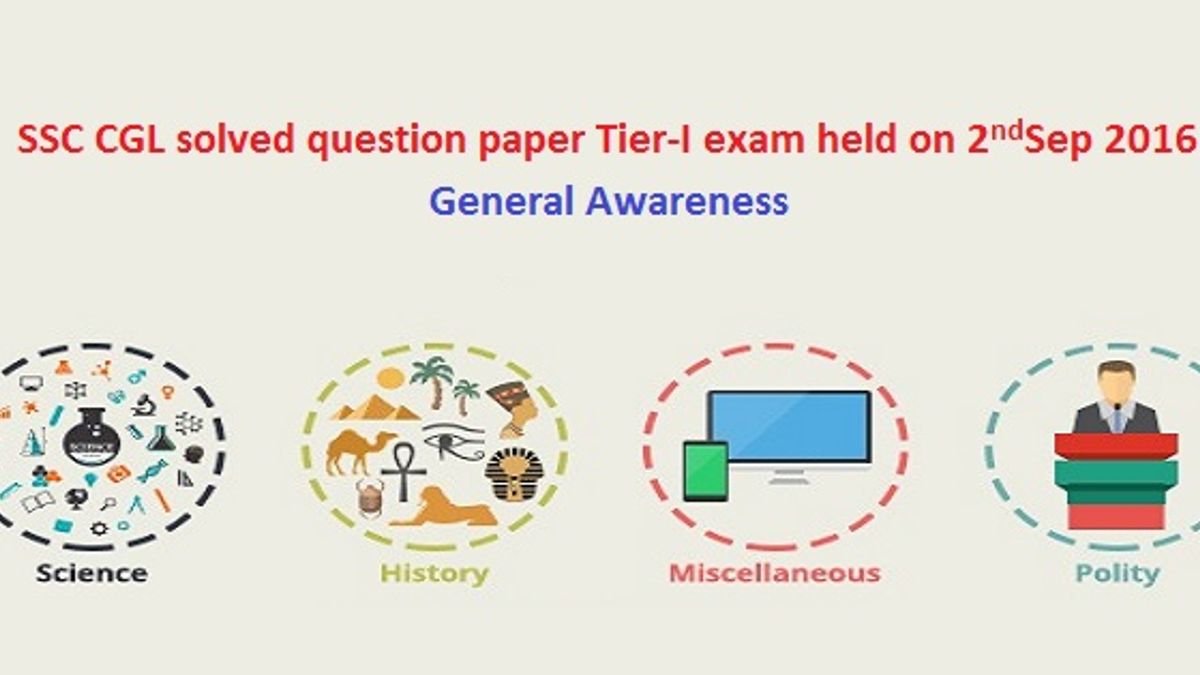 In this article, you will get 25 solved questions of General Awareness asked in SSC CGL tier-1 exam held on 2ndSeptember, 2016 (Morning shift). Please have a look at the table containing distribution of questions in this examination-

From the above observations, we can conclude that SSC had asked maximum questions from Physics, Chemistry, Geography, Sports, and Awards/Important dates/others. The level of questions were very difficult and require deep study of journals & newspapers. Hence, we strongly recommend you to allocate more time on such topics to score high in upcoming SSC CGL exams. Let us go through these questions-

Question 1.Who among the following Sikh Gurus had laid the foundation of Amritsar?

Explanation: Guru Ramdas was the fourth master in Sikhism and known as the founder of ‘Amritsar’ city.

Question 2.In the 42nd Constitutional Amendment 1976, which word was added to the Preamble?

Question 3.Which monument is known as "The National Monument of India”?

b. Gateway of India

Explanation: The India Gate is a war memorial located astride the Rajpath. It is also known as “The National Monument of India”.

Question 4.Which of the following country has recently declared 3 month emergency following a failed military coup?

Explanation: Turkish President Recep Tayyip Erdogan had announced a three-month state of emergency following the failed military coup on 15 July 2016 under the Article 120 of Turkish constitution.

Question 5.The award which, the famous writer and social activist Mahasweta Devi, who passed away recently, did not win

Question 6.Which place is said to be the Manchester of South India?

Explanation: Coimbatore is called the "Manchester of South India" due to its extensive textile industry, fed by the surrounding cotton fields.

Question 7.A galvanometer can be converted into a voltmeter by connecting with it a

a. high resistance in parallel

b. low resistance on parallel

Explanation: A meter can be calibrated as a DC voltmeter by placing a resistor in series with the meter coil.

Question 8.In computer processing, __________ selects processes from the pool and loads them into memory for execution.

Explanation: A job scheduler is a computer application for controlling unattended background program execution of jobs by loading them into memory for execution.

Question 9.Name the first cricketer to score 1000 runs in an innings in any competitive match

Explanation: On 4 and 5 January 2016, he became the first person to score more than 1,000 runs in one innings in an officially recognised match. He scored 1,009 not out, from 323 balls, for K. C. Gandhi High School of the Kalyan administrative district.

Question 10.The beach sands of Kerala are rich in

Explanation:India has the largest reserve of Thorium according to the USGS estimates and Kerala accounts for 16% of it, especially the beaches in Kerala.

Question 11.During which of the following operating conditions of an automobile, carbon monoxide content in exhaust gas is maximum?

Explanation: Idling refers to running a vehicle's engine when the vehicle is not in motion. It is estimated that Idle running left the maximum CO in the exhaust.

Question 12.India's first Railway University will come up at

Explanation: India’s first railway university will be set up in Vadodara, Gujarat, which will help in carrying out innovation and modernization for the Indian Railways.

Question 13.The Himalayas is the example of ____

Explanation: Fold mountains like Himalayas form when two tectonic plates move towards each other at a convergent plate boundary and formation took place from sedimentary rocks that accumulate along the margins of continents.

Explanation: The Indira Gandhi Canal is one of the largest canal projects in India. It starts from the Harike Barrage at Harike, a few kilometers below the confluence of the Satluj and Beas rivers in the Indian state of Punjab.

Question 15.Even after sunset, the air near the Earth's surface continue to receive heat due to

Explanation: Earth's surface absorbs solar radiation and emits terrestrial radiation. That is why air near the earth surface continue to remain warm.

Question 16.At the Rio Olympics, who was the flag bearer of the Indian contingent?

Explanation: Abhinav Bindra is the world shooting champion at Beijing Olympics. He was the flag bearer of India in Rio Olympics 2016.

Question 17.A landscape which is caused due to the fissure in the earth along which one side has moved down with reference to the other is known as

b. U Shaped Valley

Explanation: A rift valley is formed on a divergent plate boundary, a spreading apart of the  surface,which is subsequently further deepened by the forces of erosion.

Question 18.The largest artery in human body is

Explanation: The largest artery is the aorta, the main high-pressure pipeline connected to the heart's left ventricle. The aorta branches into a network of smaller arteries that extend throughout the body.

Explanation: A eudiometer is a laboratory device that measures the change in volume of a gas mixture following a physical or chemical change.

a. used to melt metals

b. used to fuse two metals

c. used as an abrasive

d. used as an explosive

Ans. used as an explosive

Explanation: Tri-Nitro Toluene is a yellow chemical compound, which is used as explosives.

Explanation: When a token cut motion is moved, a token amount of Rs 100 is cut from the total grants under a head to express the displeasure of the opposition to the scheme or head under which the demand is laid out.

Question 22.One of the leading producers of asbestos in the world is

Question 23.Beighton Cup is associated with which of the following?

Explanation: Beighton Cup is organised by Bengal Hockey Association and is one of the oldest field hockey tournament in India.

Question 24.If Reserve Bank of India reduces the cash reserve ratio, it will :

c. have no impact on credit creation

d. have no definite impact on credit creation

Explanation: Credit creation is the reciprocal of the CRR.

Question 25.Nitrification is the biological process of converting

a. N2 into nitrate

b. N2 into nitrite

Explanation: Nitrification is the biological oxidation of ammonia or ammonium to nitrite followed by the oxidation of the nitrite to nitrate.