Twinkle twinkle Neutron star; how many know what you are?

In this article you will get familiar with the Neutron star.

Q. Twinkle twinkle Neutron star; how many know what you are? 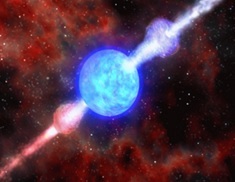 Ans. A Neutron star is the densest and smallest star known to exist in the universe. It is created when stars, four to eight times as massive as the sun explode in a gigantic explosion called a supernova. Due to this explosion, the outer layers of the stars blow off into the space but their cores remain behind that continue to collapse due to the force of gravity that presses the material in on itself so tightly that protons and electrons melt into each other to make neutrons, which is where the star gets its name "Neutron star".