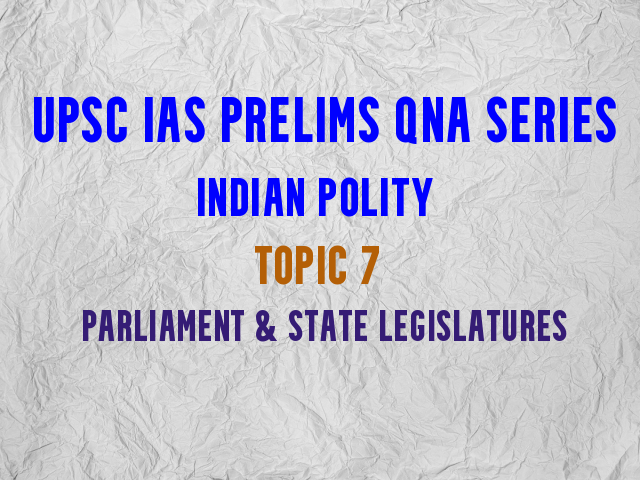 Article 79 to 122 in part V of the constitution of India deal with the organization, privileges, and powers and so on of the parliament. While Articles 168-212 deals with the State Legislatures. Aspirants preparing for the coveted civil services exams must thoroughly study and revise these topics to score well in Prelims as well as in Mains GS 2 paper. To help the aspirants in their preparation and revision, we have provided 10 questions based on the latest UPSC Prelims pattern. These questions have been framed by the subject expert on the three most important topics of Indian Polity.

1) Out of the seven Union territories, only Delhi & Pondicherry have representation in Rajya Sabha.

2) The President can nominate only 12 members to the Rajya Sabha.

3) In Lok Sabha 20 members are to be representatives of the Union Territories.

Which of the statement given above is/are correct.

1) If a person is elected to both the houses of Parliament he must intimate within 10 days in which house he desires to serve.

2) A member of parliament may resign his seat by writing to the chairman of Lok Sabha or speaker of the Rajya Sabha.

Which of the statements given above is / are correct.

Ques 4: The quorum to hold a meeting of a House of the State Legislature shall be:

b) One-half of the total membership of the House

c) One-tenth of the total membership of the House

Ques 5: What is the maximum permissible strength of the Legislative Assembly (Vidhan Sabha) of any State?

Ques 6: Which of the following statements is not correct?

c) The age limit for voting was reduced from 21 years to 18 years by the 65th Constitutional Amendment.

Ques 7: What criteria should the candidate fulfill to be elected to the Lok Sabha?

a) The candidate does not have to be a registered voter of his constituency.

Ques 8: A no-confidence motion against the Union Government can be initiated in which among the following ?

a) Lok Sabha only

b) Rajya Sabha only

Ques 9: For how long, a joint sitting of both the houses of Parliament may be convened to consider a bill which was passed by one house and pending in another house?

Ques 10: Which one of the following states does not have Vidhan Parishad?