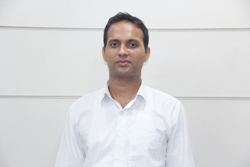 Nitin Sangwan, an IRS officer, got the 28th rank in the Civil Services Exam 2015. He is a multi talented personality and a man of few words. Came in the white shirt and dark coloured trouser, he gave glimpse of his Civil Services Preparation and also highlighted the important points so that he can help the other IAS aspirants through us.

He emphasised that the IAS aspirants should draw figures more and more in the General Studies Answers and in the Essay too. He said that if you delight the examiner then he will give you good marks. he says in order to fetch good marks, the candidates should make their answer sheet to look different from others. He stressed that the candidates should read as much as they can and then start writing practice.

He stated that becoming an IAS was not his childhood dream. He started his IAS Exam Preparation in Infosys only where he was working in Chandigarh. After solving the IAS Prelims Question Papers, he got motivated to start the preparation and started the preparation with the job.
Nitin Sangwan is very familiar to the socio-economic conditions prevailing in the Indian Society and particularly in the areas of Haryana as Haryana is his Home town. His home town is in Haryana and the UPSC Interview Board also asked some questions based on it.

He had done Master in Business Administration from IIT Madras. Prior to it, he has done mechanical engineering from an engineering college Haryana. He had done his schooling from DRK AVM, Chakri DADRI Haryana.

He comes from a middle class family. His father is a Government Servant and his mother is a home maker. His wife is a dentist and he has a daughter.