Find WBJEE 2015 Solved Physics Question Paper – Part 8 in this article. This paper consists of 5 questions (#36 to #40) from WBJEE 2015 Physics paper. Detailed solution of these questions has been provided so that students can match their solutions.

36. Two charges +q and –q are placed at a distance ‘a’ in a uniform electric field. The dipole moment of the combination is 2qa(cosθ i + sinθ j), where θ is the angle between the direction of the field and the line joining the two charges.

(A) The torque exerted by the field on the dipole vanishes

(B) The net force on the dipole vanishes

(C) The torque is independent of the choice of coordinates

(D) The net force is independent of ‘d’.

The net force on a dipole in an uniform electric field is zero because opposite and equal forces on both charges of dipole cancels each other.

But the torque is given as, Τ = pE sinθ

37. Find the right condition(s) for Fraunhoffer diffraction due to a single slit.

(A) Source is at infinite distance and the incident beam has converged at the slit.

(B) Source is near to the slit and the incident beam is parallel.

(C) Source is at infinity and the incident beam is parallel.

(D) Source is near to the slit and the incident beam has converged at the slit.

In Fraunhoffer diffraction, the source has to be kept at infinite distance effectively from the slit because then only the incident rays are parallel. This can be achieved if

38. A conducting loop in the form of a circle is placed in a uniform magnetic field with its plane perpendicular to the direction of the field. An e.m.f. will be induced in the loop if

(A) it is translated parallel to itself.

(B) it is rotated about one of its diameters.

(C) it is rotated about its own axis which is parallel to the field.

(D) the loop is deformed from the original shape.

Emf will be induced in the loop only when flux changes. Now, if the loop is translated parallel to itself then there is no flux change. Hence option A is not correct.

If the loop is rotated about one of its diameters then the flux passing through loop changes so, B is correct option.

If the axis is parallel to field then again there will be no change in flux and hence no emf will be induced in the loop.

If the loop is deformed then obviously its area will change and hence the flux flowing through it will also change.

39. A circular disc rolls on a horizontal floor without slipping and the centre of the disc moves with a uniform velocity v. Which of the following values the velocity at a point on the rim of the disc can have?

At each point on the rim the velocity is tangent due to circular motion and horizontal to the ground due to linear motion of the centre of mass of the disc. So, the resultant velocity will never be v or –v.

So, the correct options are C and D.

40. Consider two particles of different masses. In which of the following situations the heavier of the two particles will have smaller de Broglie wavelength?

(A) Both have a free fall through the same height.

(B) Both move with the same kinetic energy.

(C) Both move with the same linear momentum.

(D) Both move with the same speed.

De Broglie wavelength (λ) can be given as: 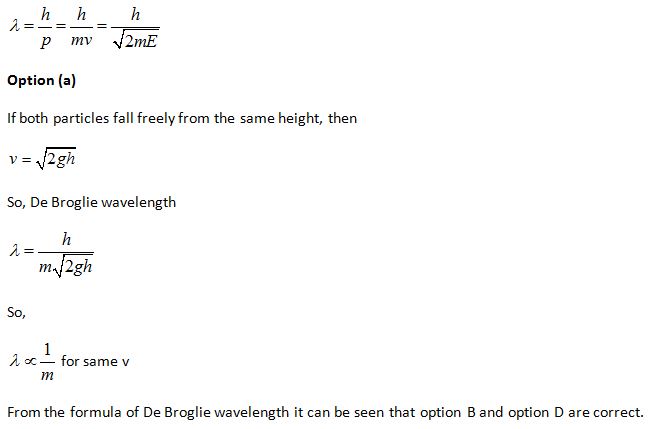