What is three language formula that is in debate to be implemented in CBSE?

The Central Board of Secondary Education (CBSE) on 20 August 2015 directed a total of 16,000 affiliated schools that they must implement the “three-language formula.” But what exactly is this and how will it be advantageous/disadvantageous for the people associated with the board.

The Central Board of Secondary Education (CBSE) on 20 August 2015 directed a total of 16,000 affiliated schools that they must implement the “three-language formula.” But what exactly is this and how will it be advantageous/disadvantageous for the people associated with the board (such as teachers and students affiliated to CBSE board)? A lot of schools are now fearing that implementation of 3-langugage formula will eventually limit the choices of pupils in the school for learning foreign languages that they are offering. A circular issued by CBSE, in fact, directed the schools to seek information from the students regarding their preferential language for studying. Before debating about the pros or cons of this formula, let us find understand it completely so that the greenhorns know what we are talking about. 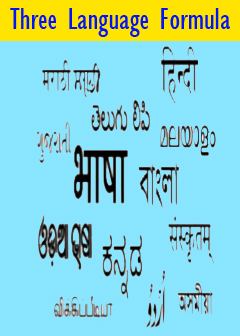 The three-language formula has its roots back in the year 1961 and it was implemented as a result of a consensus during the meeting of various CMs of the Indian states. According to the National Education Policy of 1968, the three-language formula means that a third language (apart from Hindi and English), which should belong to Modern India, should be used for education in Hindi-speaking states. In the states where Hindi is not the primary language, regional languages and English, along with Hindi shall be used.

This formula was altered and amended by Kothari Commission (1964–66) so as to accommodate regional languages and mother tongues of the group identities. Also Hindi and English remained at the two ends of the line. It is believed that the three-language formula is just a strategy and should not be seen as a national language policy.

What is the debate about?

A lot of CBSE-affiliated schools, these days, are offering mother tongue or English, Hindi and a foreign language, such as Mandarin, German and French. This the root cause of the debate. A lot of schools fear that the CBSE circular issued recently could erupt a notion, wherein the foreign languages offered at the school would be used as a fourth language or maybe, just a hobby subject. This means that the students may not opt for these languages, fearing added pressure or treating it as the burden of an “elective subject.” A lot of CBSE-affiliated Government schools have already implemented this formula.

However, the major concern is the hiatus regarding removal of German from the Kendriya Vidyalaya’s syllabus. The Union Government of India in its circular asked CBSE schools to opt for the three language formula in which Sanskrit or any other modern Indian language would be required along with English and Hindi. This is seen as a decision of the HRD to replace German with Sanskrit as the third language in the Kendriya Vidyalayas. For this purpose, the HRD Ministry notified all the CBSE schools to follow three language formula. HRD Ministry debates that this formula has been into existence since long, but has not been implemented by majority of the schools, thus underscoring the diversity regarding linguistic situation throughout the country’s states.

Advantages and Disadvantages of Three-language Formula

The clear-cut advantages of this formula, as highlighted by NCERT, are as follows:

When the Three-language Formula was adopted, the idea behind it was to use it as strategy for creating a space for the students to study foreign languages, classical languages and proximate languages. While Sanskrit could be used as a classical language, the States were given a complete freedom to choose languages in their education system. The UNESCO declaration highlights that the best medium for the education of a child is his/her mother tongue. Keeping the basic structure and spirit of this Three-language Formula intact, the schools can adopt any language. There is absolutely no restriction in this.

Education in a child’s mother tongue will ensure better participation and richer interaction and transaction in the classrooms. This will lead to better outcomes of children as far as learning is concerned.

Like every coin has two sides, similarly, the Three-language Formula has its flip side too (as seen by a lot of CBSE-affiliated schools).

This might lead to heavy language burden on the students. Most of the times, a lot of schools cannot afford the resources for providing additional language faculties as well as teaching materials. The KV students are at a clear cut backfoot in the entire situation, as this has become more of a debate between German and Sanskrit. There are approximately 80,000 students in KV from class VI-VIII, studying German. The decision of the HRD Minister, Smriti Irani, has left them with nothing in hand. The decision to discard German as the third language choice in KVs and introducing a Modern India language or Sanskrit will be a major blow to these students, as well as the teachers, who will be left jobless.

While this is a debate, rather a controversy, more about German vs. Sanskrit, rather than any other language, the people at the setback are the students, half-way through the education in these languages and also the teachers, who will be left unemployed because of this. To conclude, it should be the students who should be given the choice to select the language that they need to study. Imposing Sanskrit specifically does not seem ideal from the point of view of those students who do nowhere close to understand this language. Also, there has to be a concrete plan, if at all, the Three-language Formula has to be implemented at all the schools. Gradual dismissal of language and employment of these school teachers should be carefully analyzed before hastily dropping the circulars at the schools and compelling them to implement a fabric that many do not wish to wear!

To get different queries and answer about CBSE exams, Click Here