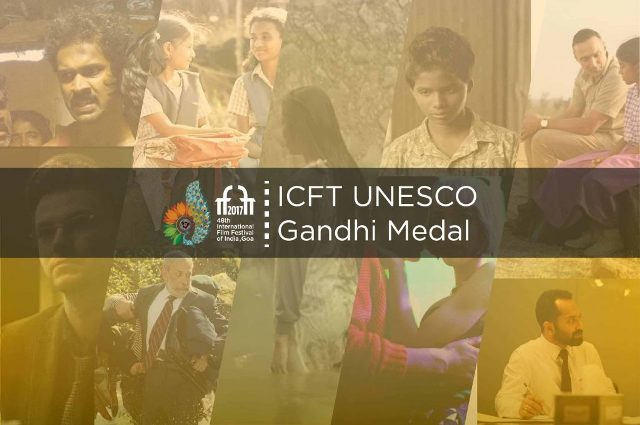 Among the total nine nominated films, five are from India.  The Indian films competing for the prestigious ICFT UNESCO Gandhi Medal include Kshitij - A Horizon, Manusangada, Poorna, Railway Children and Take-Off.

The competing foreign films include Amok from Poland, Khibula - a co-production of Germany, France and Georgia, The Last Painting from Taiwan and Women of the Weeping River - a joint production of the US and UK.

All the nine films are being screened at the ongoing IFFI’s 48th edition in Panaji, Goa.

About the ICFT UNESCO Gandhi Medal

• The UNESCO issued commemorative medal in 1994, marking the 125th anniversary of the birth of Mahatma Gandhi, the world’s advocate of peace, tolerance and non-violence

• The medal bears a portrait of Mahatma Gandhi engraved by the French artist Pierre-Yves Tremois.

• Engraved underneath is the Mahatma’s message of hope ‘In the midst of darkness light prevails’. The reverse side carries the UNESCO Logo.

• The coveted award is given to the film that best reflects Mahatma Gandhi’s ideals of peace, tolerance and non-violence.

• The 2017 winner of the award will be announced during the closing ceremony of the festival on 28 November.

• Last year the award went to Mustafa Kara for the film – Cold of Kalandar.