Hima Das: Hima Das has won her fifth gold medal in the last 20 days. She clocked 52.09 seconds to finish first in 400m in the Czech Republic.

Hima Das: Hima Das won her fifth gold medal of the season in 400m race at the Nove Mesto nad Metuji Grand Prix in Czech Republic on July 20. Hima Das finished first with last minute spurt of speed with a season-best time of 52.09 seconds. Her personal best time is 50.79 seconds, which she had clocked during the 2018 Asian Games.

Hima Das with her incredible achievement received praise from not only the Prime Minister but also the President and top Bollywood and sports personalities. Hima Das replied to every tweet thanking them for the good wishes with a promise to work even harder. 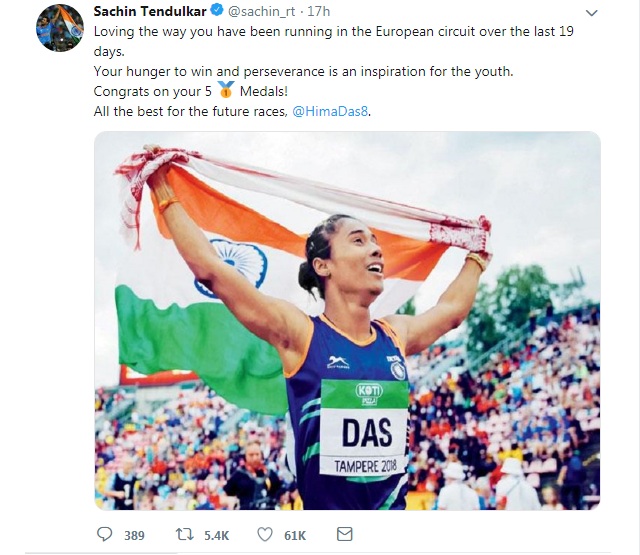 Hima Das revealed that she had even received a congratulatory call from the veteran cricketer. “Today evening was like a dream come true for me, have got a call from the god of cricket and my inspiration @sachin_rt sir. Thank you, sir, for your good wishes and inspirational words. I will leave no stone unturned for my mission #Tokyo2020," she tweeted.

Hima Das -Amitabh Bachchan tweet: Amitabh Bachchan, the legendary actor congratulated Hima Das for her incredible achievement in a series of tweets. In one of the tweets, the senior actor wrote that in 400 meters to give that kind of a spurt in the last 15-20 meters is an impossible feat! “Hima Das .. you are something special,” he tweeted.