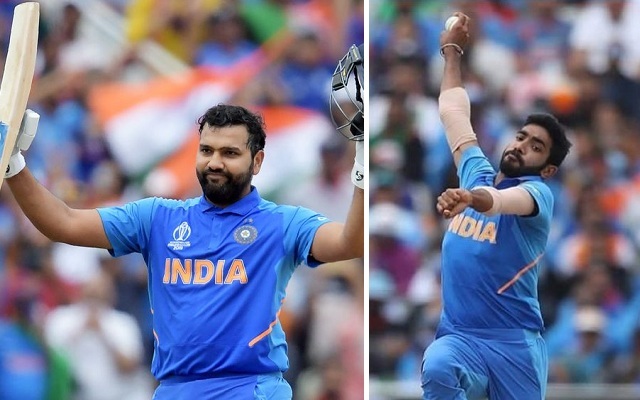 Highest Run Scorer in World Cup 2019: India's Rohit Sharma has finished at the top of the highest run scorer list of ICC World Cup 2019 with 648 runs. Rohit Sharma also tops the list of most boundaries in World Cup 2019 with 81 boundaries comprising 67 fours and 14 sixes, followed by England's Jonny Bairstow in second place who hit 78 boundaries. New Zealand's Kane Williamson was awarded the Player of the Tournament trophy for scoring 578 runs in the current world cup edition and leading his team into the finals. Kane Williamson tops the list of most runs in a single World Cup by a captain.

Rohit Sharma scored 648 runs from India's 10 matches in the current World Cup, becoming the second Indian batsman after Sachin Tendulkar to score 600 plus runs in a single World Cup. Sharma reached the milestone with his record fifth world cup century in India vs Sri Lanka World Cup cricket match. Rohit Sharma was also just 27 runs away from breaking Sachin Tendulkar's all-time world cup highest score of 673 runs but he had to make do with just one run in India's nail-biting semi-final clash.

Australia's David Warner is the second highest run scorer in World Cup 2019 with 647 runs, followed by Bangladesh's Shakib Al Hasan who scored 606 runs in 8 matches. David Warner also has the highest individual score with 166 runs, followed by Jason Roy and Aaron Finch who made 153 runs each. Warner also became the third batsman in World Cup 2019 to cross 600 runs on July 6. Bangladesh's Shakib Al Hasan also became the first player in the history of cricket to score more than 600 runs and take 10 wickets in a single World Cup edition.

In the bowling stats, Australia's Mitchell Starc tops the list of highest wicket-takers with 26 wickets in World Cup 2019. Starc is followed by New Zealand's Lockie Ferguson who took 21 wickets and England's Jofra Archer who took 20 wickets. India's Jasprit Bumrah, who took 18 wickets in the World Cup, is fifth in the list, tied at the position with Mark Wood who also took same number of wickets. India's Mohammed Shami became the third Indian bowler ever to take 31 wickets in just 11 World Cup matches. The only two Indian bowlers to have taken more wickets in the Cricket World Cup include Zaheer Khan and Javagal Srinath (both 44).

Besides this, England's Joe Root created a new World Cup record by taking 12 catches, most by a non-wicketkeeper in a single World Cup edition. With the feat, Root surpassed Australia's Ricky Ponting, who previously held the record by taking 11 catches during the 2003 World Cup. The other non-wicketkeeper players with most catches in the current edition of the world cup include South Africa's Faf du Plessis who took 10 catches and England's Jonny Bairstow who took 9 catches.

This Beard Trimmer will improve your personality instantly. You have to use it to believe it, buy it now@ just Rs. 1,199