PM Modi in G7 summit: "All issues between India, Pakistan are bilateral in nature," reiterates PM Modi during meeting with Trump

PM Modi in G7 summit: "PM Modi is confident that he the Kashmir situation is under control," says US President Donald Trump

PM Modi in G7 summit: PM Modi during his bilateral meeting with US President Donald Trump reiterated that all issues between India and Pakistan are bilateral in nature and that is why India does not bother any other country regarding them. PM Modi stated that India and Pakistan were together before 1947 and he is confident that the two nations could discuss and solve their problems together.

US President Donald Trump in his statement said that he had spoken to PM Modi last night about Kashmir and that the Prime Minister was confident that he has it under control. "They speak with Pakistan and I'm sure that they will be able to do something that will be very good,"  stated Trump. The statements were made during Prime Minister Narendra Modi's bilateral meeting with US President Donald Trump on the sidelines of the G7 Summit in Biarritz. 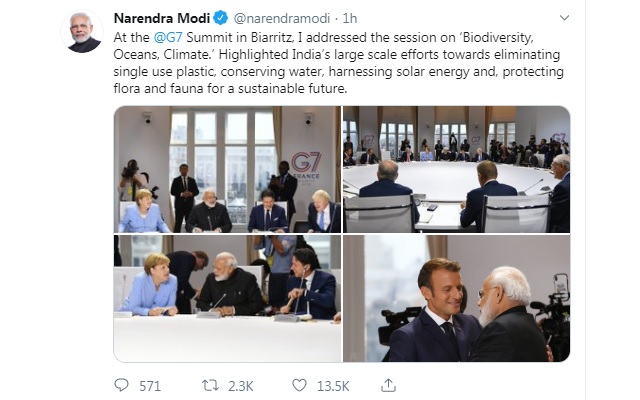 PM Modi is a participant at the 45th G7 summit at the special invitation of French President Emmanuel Macron, as India is not a member of the group of seven. The Ministry of External Affairs (MEA) referred to the invitation as a "reflection of the personal chemistry" between the two leaders and also recognition of India as a major economic power. The G7 member countries include the UK, France, Germany, Italy, Japan, Canada and the United States.

PM Modi reached Biarritz, France for the summit on August 25 after his three-nation tour of France, UAE and Bahrain. PM Modi is expected to participate in two sessions at the G7 summit on climate, biodiversity, oceans and on digital transformation and hold separate bilateral interactions with the world leaders.

In his first bilateral interaction on the sidelines of the G7 summit, PM Modi met the new British Prime Minister Boris Johnson. The two leaders had spoken on the phone earlier this week and agreed on the importance of working together to strengthen the bilateral partnership between India and the UK, especially by strengthening trade and economic relations. This was PM Modi’s first meeting with Boris Johnson since he took charge as the new Prime Minister of Britain. 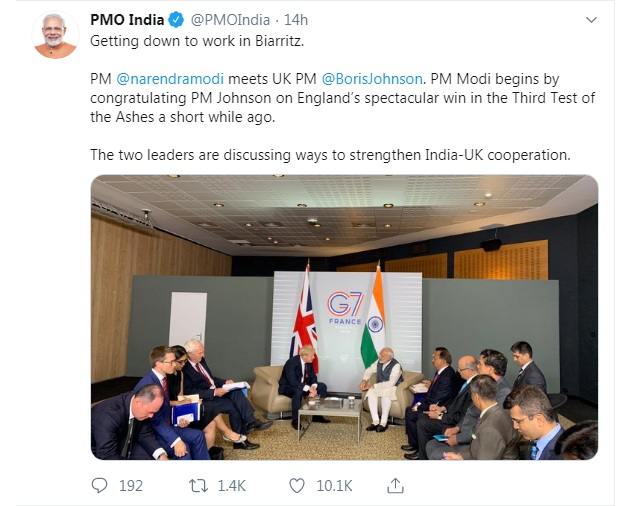 Modi also met UN Secretary-General Antonio Guterres and held extensive deliberations on a wide range of subjects, most notably on ways to strengthen the efforts to mitigate climate change. 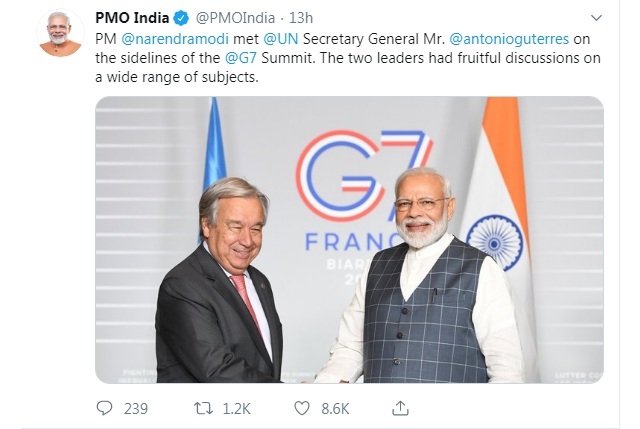 PM Modi also met President Macky Sall of Senegal on the sidelines of the G7 Summit and the two leaders discussed ways to expand bilateral ties for mutual benefit. 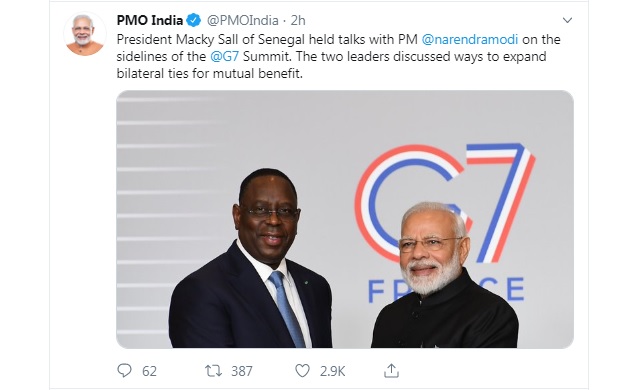 PM Modi would also be meeting  German Chancellor Angela Merkel, President of Senegal Macky Sall and President of Chile Sebastian Pinera. The Modi-Trump meet is likely to take place today around 3 pm. Modi and Trump are likely to discuss issues concerning trade, Kashmir and other topics of mutual interest. This would be the second meeting between the two leaders in 2019; they had also previously met on the sidelines of the G20 summit in Osaka, Japan. Trump had said earlier this week that he would like to discuss the situation in Kashmir with Modi and help in easing the India-Pakistan tensions.

India has been specially invited as a "Biarritz partner country” for the 45th G7 summit along with other nations including Australia, Chile, South Africa, Rwanda, Senegal, Egypt and Burkina Faso.

The main theme of the G7 summit this year is “combating inequality” and its main focus will be on the climate and biodiversity.