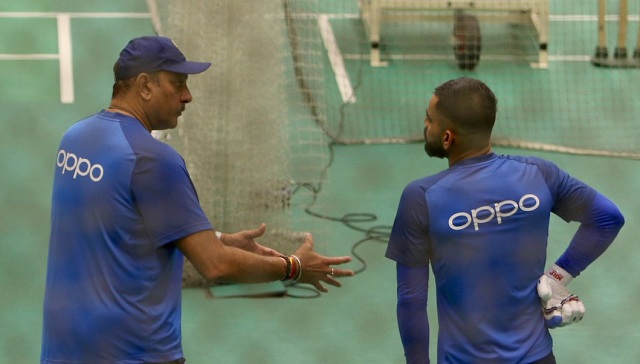 India vs West Indies Predicted Playing XI, World Cup 2019: India vs West Indies ICC World Cup cricket match will be played today from 3 PM IST at Old Trafford, Manchester, the same ground where India vs Pakistan had taken place. The weather is clear today in Manchester. Unbeaten India will be looking to continue its winning streak and is likely to keep its playing XI unchanged.

India’s Predicted Playing XI: India had made one change during India vs Afghanistan, by including Mohammed Shami in its bowling attack, following an injury to India’s key bowler Bhuvneshwar Kumar. Shami had proved to be lucky for India, as his historic hat-trick helped India win its world cup match against Afghanistan, which it was on the verge of losing. India would be looking to stick with the same playing XI, to further cement and prepare its side for the upcoming semi-finals.

Though Bhuvneshwar Kumar looks to have recovered and was seen bowling during India’s practice session in the nets in Manchester, India is likely to give him more time to recover, so that he is ready for India’s next big match against hosts England. So Shami is likely to retain his place in India’s playing XI against the West Indies. The rest of the XI is also likely to remain same, Rishab Pant most probably will be sitting out of India vs West Indies cricket match.

West Indies Predicted Playing XI: The West Indies also faced a major injury blow on June 24, when one of their key players, all-rounder Andre Russell was ruled out of the ICC World Cup 2019 due to a knee injury. Russell underwent successful knee surgery on Wednesday. In West Indies vs Australia world cup match, Andre Russell had become the quickest batsman to score 1,000 runs in ODIs in only 767 deliveries.

Russell’s replacement, top-order batsman Sunil Ambris, who has played six Tests and six ODIs for the West Indies, has arrived in Manchester. However, West Indies skipper said that they are likely to stick with Evin Lewis, who is expected to open with Chris Gayle. Lewis also had an injury scare recently, which pushed him down the batting order in West Indies vs New Zealand world cup match. However, Holder says Lewis is fit to play now.