Annie Zaidi’s work, ‘Bread, Cement, Cactus’, includes reportage and memoir to explore concepts of home and belonging rooted in her experience of contemporary life in India. 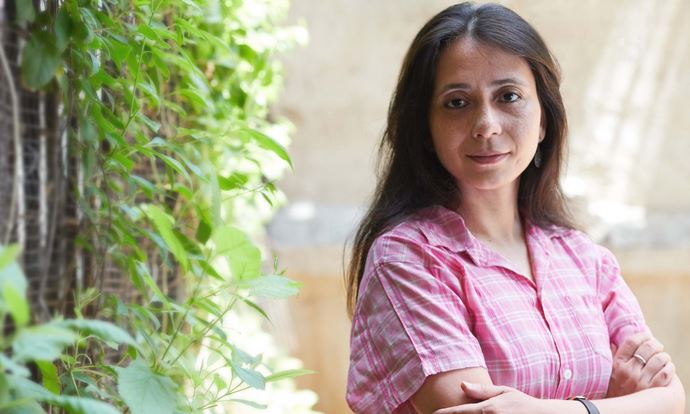 Mumbai based journalist and playwright Annie Zaidi has declared the winner of the Nine Dots Prize-2019 for her essay Bread, Cement, Cactus. She is a freelance writer whose work includes reportage, essays, short stories, poetry and plays, she has been announced as the winner for year 2019-20.

Annie Zaidi’s work, ‘Bread, Cement, Cactus’, includes reportage and memoir to explore concepts of home and belonging rooted in her experience of contemporary life in India, where migration – within the country, especially from villages to cities – is high. The proposed book will answer the big question through examining how a citizen’s sense of ‘home’ might collapse, or be recovered.

•    She has published both fiction and non-fiction, including a collection of essays Known Turf: Bantering with Bandits and Other True Tales', which was shortlisted for the Crossword Book Award in 2010. Her collection of short fiction Love Stories 1 to 14' a published in 2012.
•    Her new proposed book, based on her Nine Dots Prize winning essay Bread, Cement, Cactus', will be published by Cambridge University Press in May 2020.
•    She also writes poetry (Crush, 2007), short stories (The Good Indian Girl, 2011), plays and novels.
•    In June 2012, Elle magazine named Zaidi as one of the emerging South Asian writers "whose writing we believe will enrich South Asian literature."
•    In 2015, Zaidi published an anthology called Unbound: 2,000 Years of Indian Women's Writing. 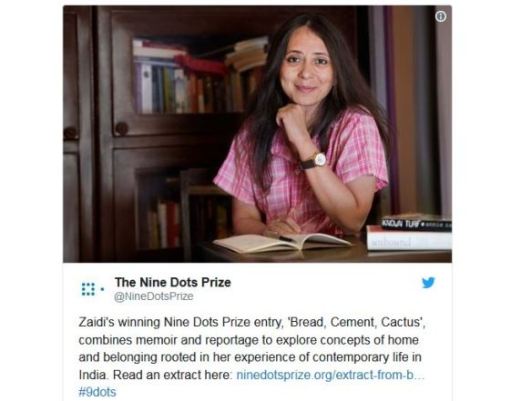 The Nine Dots Prize aims to reward original thinking in response to contemporary societal issues. Each Prize cycle lasts two years, with a new question being announced every other October. All those 18 years of age and over can participate but responses and the resulting book must be in English. Organisation look for innovative thinking, either it is new voices or experienced authors. The Prize awarded anonymously. The Board award the Prize to the entry that in their view best responds to the set question.

Excerpts from the book

Annie Zaidi’s 3,000-word response to the question ‘Is there still no place like home?’ -

“In Muhammadabad, a mofussil village struggling to morph into a town, we trace fourteen generations. The uncle who told me this is now gone. Fifteen generations, then.

I fight with my mother: We don’t come from this! You came from cities like Lucknow and Delhi, from secularism and cosmopolitanism, from an English-medium education. You wore breeches and rode horses!”