Kavitha Gopal has become the first girl student of IIT Madras to be honoured with the President of India Prize. 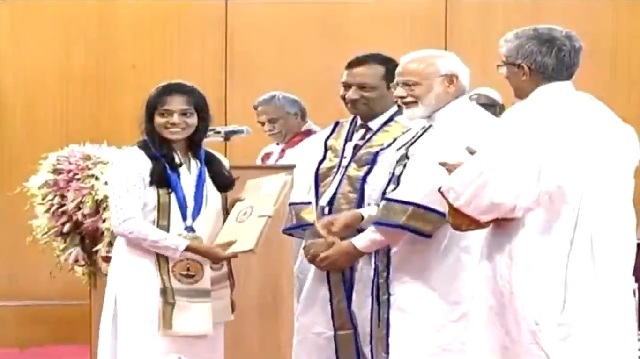 Kavitha Gopal has become the first girl student of IIT Madras to be honoured with the President of India Prize. She received the honour and medal from Prime Minister Narendra Modi at the 56th convocation of Indian Institute of Technology Madras.

With a CGPA of 9.95, Kavitha Gopal also won two other top awards -the Bharat Ratna M Visvesvaraya Memorial Prize and the B Ravichandran Memorial Prize for the highest CGPA in B. Tech CSE. Gopal shared the two prizes with another student, Pradyumna Venkatesh Chari of B. Tech (Electrical Engineering).

Kavitha Gopal, with her hat-trick successes, ended the long male-dominated legacy of the prestigious honour. Speaking on her win, Gopal said, “I am extremely excited to have received these awards and it is a dream come true to be graduating from IIT Madras. I have some thrilling plans for my future and it involves coding.”

Kavitha Gopal is currently working as a software engineer with Google India. She had graduated with a B. Tech degree in Computer Science and Engineering on September 30, 2019.

She had done her schooling from the Atomic Energy Central School in Anupuram and later at the Kendriya Vidyalaya in Kalpakkam.

Gopal said that she developed a passion for coding and computers when she opted for the subject in class 11th.

However, there has been a slow change in the system and more and more women are now opting for STEM disciplines. There is still though a long way to go before fixing the gender ratio.