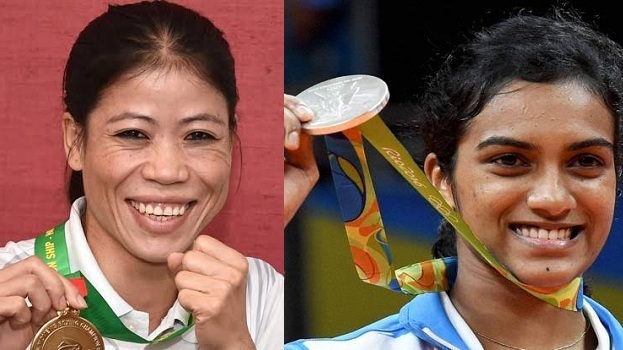 Besides the names of the women sportspersons, the sports ministry has recommended the names of archer Tarundeep Rai and hockey Olympian MP Ganesh for the Padma Shri award.

According to Ministry sources, the names are yet to be approved by Sports Minister Kiren Rijiju. Once they are approved, they will be sent to the Padma Awards Committee of the Ministry of Home Affairs.

Ace Indian boxer Mary Kom is the first female athlete to be recommended for the Padma Vibhushan. Mary Kom is a six-time World Champion and 2012 Olympic bronze medalist. She is also the first Indian female boxer to win gold at the Asian Games (2014) and Commonwealth Games (2018).

Only three sportspersons have received the Padma Vibhushan award till now and they include Vishwanathan Anand (2007), Sir Edmund Hillary (2008) and former Indian batting maestro Sachin Tendulkar, who received the honour in 2008.

World Champion PV Sindhu has been recommended for the Padma Bhushan award this time, India’s third-highest civilian award. Sindhu became the only Indian to win the World Badminton Championship title after beating Japan's Nozomi Okuhara 21-7, 21-7. Sindhu is also the first Indian badminton player to win a silver in the Olympics. She had reached the badminton singles finals at the 2016 Rio Summer Olympics but lost to Spain's Carolina Marin.

Sindhu was honoured with the Padma Shri Award in March 2015, Arjuna award in September 2013 and the Rajiv Gandhi Khel Ratna award in August 2016.

Overall, the sports ministry has reportedly recommended nine female sportspersons for the Padma awards this year. The final list of the awardees will be released on January 25, 2020 by the Padma awards committee.