Om Birla has elected as Speaker of Lok Sabha. Om Birla has succeeded Sumitra Mahajan who decided not to contest Lok Sabha elections in 2019. 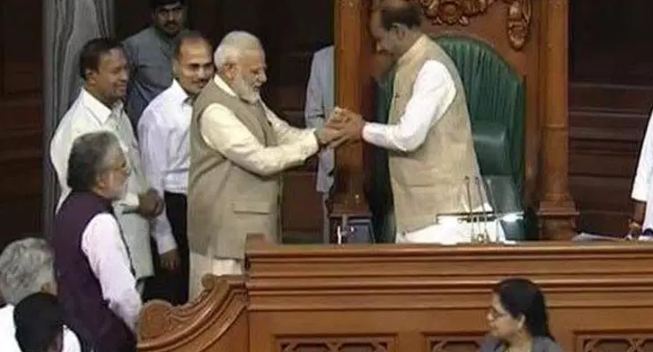 Om Birla has become Speaker of 17th Lok Sabha, he is two time BJP member of Parliament (MP) from Rajasthan. Om Birla has succeeded Sumitra Mahajan who decided not to contest Lok Sabha elections in 2019. Now, Virendra Kumar’s role has been ceased to exist.

In Lok Sabha elections 2019 Om Birla defeated Congress's Ramnarayan Meena with a big margin of over 2.5 lakh votes in the Kota-Bundi Lok Sabha seat. Prime Minister Narendra Modi and BJP President Amit Shah had collectively selected Om Birla's name as their choice for the post of the Lok Sabha Speaker.

Om Birla’s political career at a glance
•    Om Birla (born 23 November 1962) is an MP from the Kota-Bundi constituency of Rajasthan state. He was a three time Member of Rajasthan Legislative Assembly from Kota South. He is currently in the race for Lok Sabha 17th lok sabha speaker post.
•    Om Birla won his first assembly elections contesting from Kota South in 2003. He defeated Shanti Dhariwal from Congress by a margin of 10,101 votes.
•    Before becoming a Member of Parliament, he won his third assembly election against Pankaj Mehta (Congress) by close to 50,000 votes in 2013.
•    He contested the 16th Lok Sabha elections from Kota-Bundi constituency and secured a victory by a margin of 2,000,782 against a Congress candidate in 2014.
•    Apart from this, he was a member of the Standing Committee on Energy in Parliament, member of Committee on Petitions and Consultative Committee for Ministry of Social Justice and Empowerment.

Also Read: Facebook’s Libra Cryptocurrency: When and how will be able to use?