NASA claims that as per first evidence these faults of shrinking is still active and producing moonquakes today as the Moon continues to gradually cool.

NASA claims that as per first evidence these faults of shrinking is still active and producing moonquakes today as the Moon continues to gradually cool. NASA study finds that some of these quakes can be fairly strong, around five on the Richter scale.

•    Nasa's Lunar Reconnaissance Orbiter (LRO) sent 3D images of moon surface that revealed its surface is shrinking.
•    NASA found that a number of the quakes recorded in the Apollo data happened very close to the faults seen in the LRO images.
•    Apollo missions dropped the instruments and seismic data was taken from that only.
•    After using the algorithm method, NASA team found that eight of the 28 shallow quakes were within 30 kilometers (18.6 miles) of faults visible in lunar images.

NASA study explained that Mercury shrank much more than the Moon. NASA has found that planet Mercury also has various thrust faults, it ranges up to 600 miles (1,000 kilometers) long and over a mile (3 kilometers) high, that are significantly larger relative to its size than those on the Moon.

When planets heat up they expand their size and when they cool size of planet gets shrink. Mercury’s large faults reveal that is was likely hot enough to be completely molten after its formation. NASA is still studying to understand the Moon’s origin and to compare it with Mercury whether the same happened to the Moon or not. NASA also said that it is quite possible an ocean of magma is slowly heating deep interior of moon.

•    Lunar Reconnaissance Orbiter (LRO) takes 3D images of moon and it entered lunar orbit on June 23, 2009. Its exploration mission began on September 15, 2009.
•    For planning NASA's future human and robotic missions to the Moon LRO’s data keeps much importance for all.
•    Its detailed mapping program is identifying safe landing sites, locating potential resources on the Moon, characterizing the radiation environment, and demonstrating new technologies.
•    The first images from LRO were published on July 2, 2009, showing a region in the lunar highlands south of Mare Nubium (Sea of Clouds).
•    Before LRO's launch, NASA provided an opportunity to the public to have their names placed in a microchip on the LRO. The deadline was July 31, 2008 and surprisingly almost 1.6 million names were submitted for this mission.

Story 2: An extinct bird reappeared thanks to rare evolution process

A study published in zoological journal explained that an extinct bird came back from the dead after a process called ‘iterative evolution’ twice. In study done by University of Portsmouth and Natural History Museum, found that on two occasions, separated by tens of thousands of years, a rail species was able to successfully colonise at Aldabra.

This bird is called white-throated rail (Dryolimnas cuvieri) which came from its native home in Madagascar to Seychelle Islands Aldabra atoll. This place is believed safest for birds as it is predators free.

•    Dryolimnas cuvieri first disappeared from the Aldabra atoll in the Seychelles 1,36,000 years ago.
•    Since Aldabra is safest place for them, they had lost their ability to flight. Researchers found the last surviving flightless species of bird, a type of rail, in the Indian Ocean came back through a process called "iterative evolution.
•    According to the National History Museum, why these birds left their native place from Madagascar, is still unclear. However, factors like overpopulation or lessening food supply may have sparked the mass migration of birds from Madagascar to other places in the world.
•    After examining bones of the ancient flightless Aldabra rails, scientists at the University of Portsmouth and the Natural History Museum, found that both species those that existed before and after the flood are Aldabra rails (Dryolimnas cuvieri aldabranus). 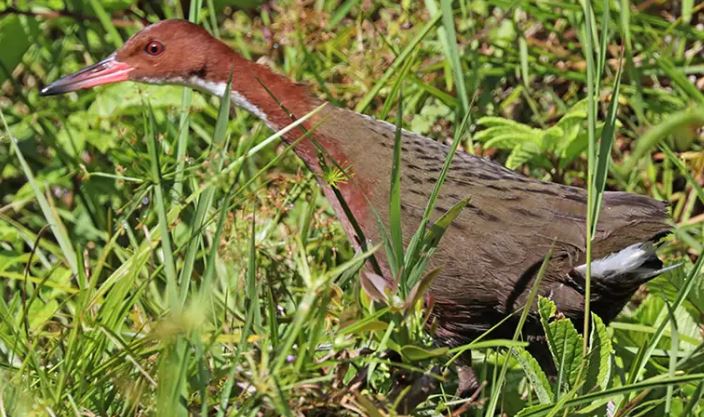 What is iterative evolution?

Iterative evolution is a repeated evolution of similar or parallel structures in the development of the same main line. There are many examples of iterative evolution in the fossil record, spanning a wide range of groups. This evolutionary conservatism is probably owing to the overriding morphogenetic control exerted by certain regulatory genes.

·         The rails, which migrated to other islands including Mauritius and Reunion, also landed on Aldabra. Aldabra, then free of predators, allowed the rail to evolve and become flightless due to the lack of threats on the island.

·         Researchers in the study, who published their findings in the Zoological Journal of the Linnean Society, studied the rail's fossils from before and after the flooding event.

They found that the wing bones were in an advanced state of flightlessness, while bones from the ankle showed signs that it was evolving toward flightlessness.