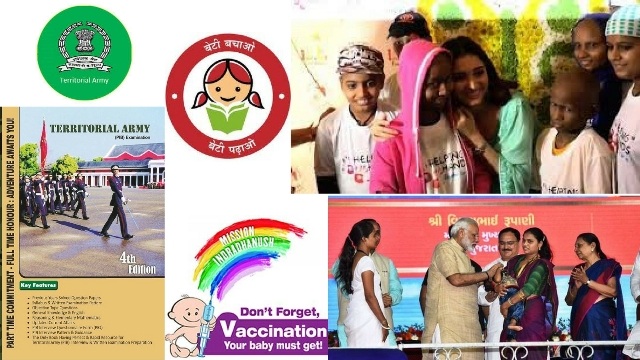 Jammu and Kashmir government has launched a special campaign under Mission Indradanush to achieve full immunisation in the state.

The campaign was launched on 8 October 2017, following the launch of a nation-wide intensified drive under the Mission by Prime Minister Narendra Modi on the same day.

Women and Child Development Ministry would be celebrating ‘Beti Bachao Beti Padhao’ week from 9-14 October 2017 with the theme ‘the Daughters of New India’.

States, union territories and districts have already undertaken several innovative initiatives to address the issue of declining child sex ratio and promote value of girl child.  The collective and coordinated efforts undertaken at national, state and districts level has been successful in establishing a substantial improvement in the number of girls being born in the target districts.

The programme focuses on districts with the worst child sex ratio as per the 2011 Census.

Territorial Army celebrated its 68th Raising Day on 9 October 2017. As a lead up to the occasion, TA symphony Band performed at India Gate on 8 October 2017. The event was organised to showcase the Territorial Army, motivate the citizens of the country and inculcate a spirit of National integration.

The army was established by the first Indian Governor-General of India, C Rajagopalachari on 9 October 1949, after the Independence Territorial Army Act was passed in 1948.

The Indian Territorial Army (TA) is a second line of defence after Indian Army. The present role of the TA is to relieve the Regular Army from static duties and assist civil administration in dealing with natural calamities and maintenance of essential services in situations where the life of communities is affected or the security of the country is threatened.