New Map of India: This is how new J&K, Ladakh map looks!

New Map of India: India depicts PoK's Muzaffarabad, Mirpur and Punch as a part of J&K and Gilgit-Baltistan as a part of Ladakh.

New Map of India: The Government has released a new political map of India after two new Union Territories- Jammu & Kashmir and Ladakh came into existence on October 31, 2019. The new Union Territory of Jammu and Kashmir has a total of 22 districts, while Ladakh has two districts.

The new political map of India shows three districts of Pakistan occupied Kashmir (PoK) – Muzaffarabad, Mirpur and Punch as a part of the Union Territory of Jammu and Kashmir and Gilgit-Baltistan, another Pakistan administered territory, as a part of Ladakh.

The move of including Pakistan-administered areas as a part of India’s geographical territory comes amidst protests by Pakistan and its ally China against India’s move to bifurcate J&K into two Union Territories.

The Indian Parliament had passed the proposal to withdraw the statehood of J&K on August 5. The new political map of India was released by the Ministry of Home Affairs on November 2, 2019.

About New Map of India

• The new map of India depicting the new Union Territories of Jammu & Kashmir and Ladakh was prepared by the Survey General of India.

• The new map of the Jammu and Kashmir Union Territory includes 22 districts, including areas of Muzaffarabad and Mirpur, which were under the PoK in the previous map.

The central government introduced a resolution for the bifurcation of the state in Parliament on August 5, 2019. The state was divided into two parts and given the status of Union Territory after the approval of the President. Also, the provisions of Article 370 giving special status to the state were repealed. After this decision, on October 31, two new UTs duly came into existence in India. The central government appointed GC Murmu and RK Mathur first Lieutenant Governors of Jammu and Kashmir and Ladakh respectively. 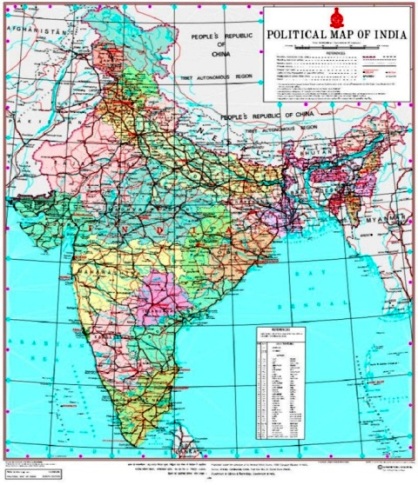 Also Read | What is Public Safety Act of Jammu & Kashmir: All you need to know