The Nobel Prize in Physics 2019 was awarded to James Peebles and jointly to Swiss astronomers Michel Mayor and Didier Queloz for their discovery of an exoplanet.

The 2019 Nobel Prize in Physics was awarded to James Peebles in one half for theoretical discoveries in physical cosmology and other half jointly to Michel Mayor and Didier Queloz for the discovery of an exoplanet.

The Nobel Prize announcement was done by the Secretary-General of the Royal Swedish Academy of Sciences, Goran K. Hansson.

The Nobel Prize in Physics 2019 recognises the work in understanding the structure and history of the universe and the first discovery of an exo-planet, as the discoveries have completely changed the conception of the world.

The Nobel laureate's theoretical framework on physical cosmology, which he developed over two decades, has formed the core foundation of the modern understanding of the history of the Universe, starting from the Big Bang to present. 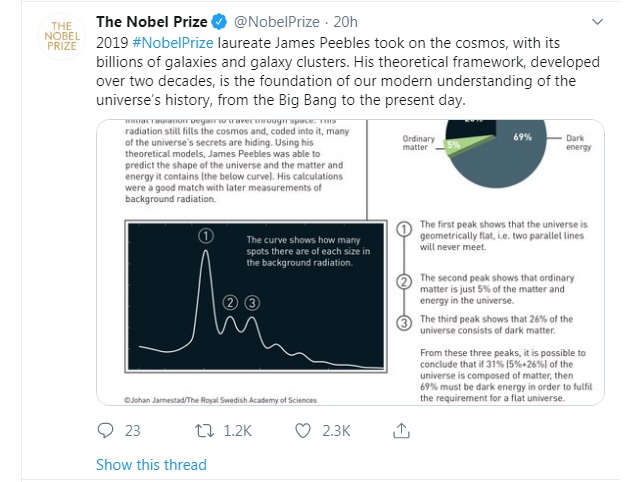 Peebles had built upon the work done by Albert Einstein on the origin of the Universe by understanding the time succeeding the Big Bang.

Michel Mayor and Didier Queloz have been honoured with the 2019 Nobel Prize for their work in discovering unknown worlds. The duo made the first discovery of an exoplanet, orbiting a solar-type star, 51 Pegasi in 1995. 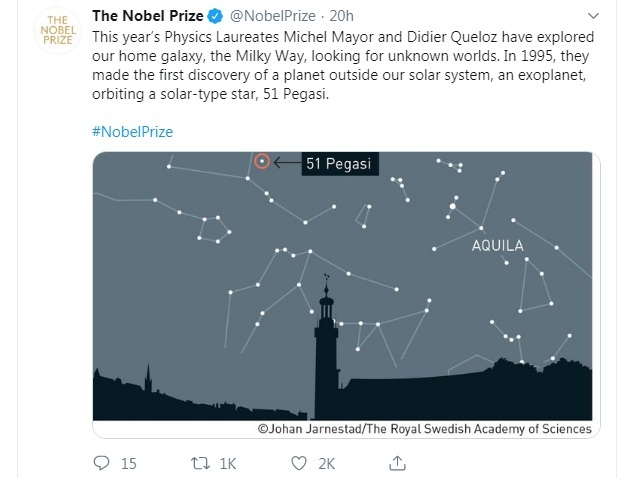 The discovery paved way for a revolution of kinds in astronomy, as over 4000 exoplanets have been found since then in the Milky Way galaxy. Many new worlds have been discovered of different sizes, forms and orbits including many super-earths.

James Peebles is an Albert Einstein Professor of Science at the Princeton University, US. Peebles’ theoretical framework has formed the basis of the contemporary ideas of the universe.

His work revealed that the matter known to humans including planets and stars make up only five percent, while the remaining 95 percent is made up of unknown dark matter.

In a historic discovery in 1995, the two swiss astronomers, using custom-made instruments detected a gaseous ball orbiting a star 50 light-years away from the Sun.

The astronomers, using the phenomenon known as the Doppler effect, proved that the planet known as 51 Pegasus b, was orbiting its star. 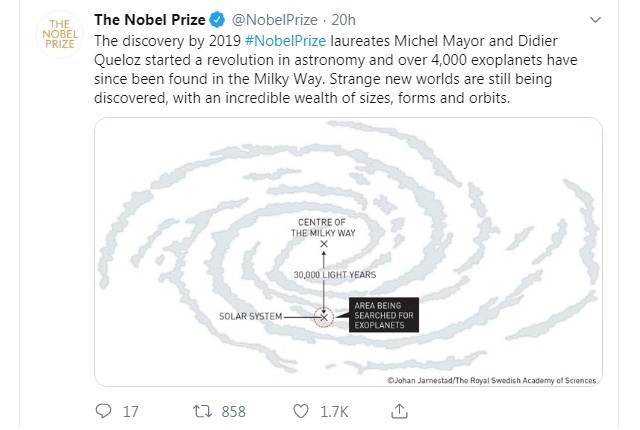 The 2018 Nobel Prize in Physics was awarded in two halves as well, one half to Arthur Ashkin for inventing optical tweezers and the other half jointly to Gérard Mourou and Donna Strickland for their method of generating high-intensity and ultra-short optical pulses.