The Nobel Prize in Chemistry 2019 has been jointly awarded to John B Goodenough, M Stanley Whittingham and Akira Yoshino for the development of lithium-ion batteries.

The Nobel Prize in Chemistry rewards the development of lithium-ion batteries, as the lightweight, rechargeable and powerful batteries are used in almost every kind of wireless electronics these days, ranging from mobile phones and laptops to electric vehicles.

The lithium-ion batteries are currently used to power portable electronics and long-range electric cars.  The batteries have revolutionized the technology sector by paving the way for a wireless and fossil energy-free society. The batteries can store energy from renewable energy sources such as wind and solar power.

The origin of the lithium-ion battery can be traced back to the 1970s when there was an oil crisis. Stanley Whittingham was working on finding ways to create renewable energy technologies when he discovered an energy-rich material. 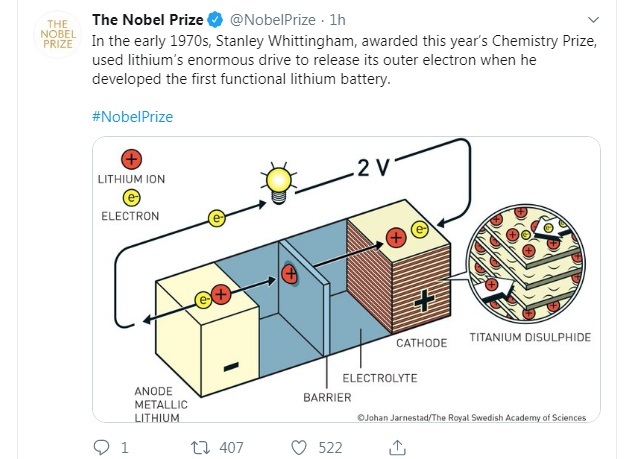 Whittingham used the material to create an innovative cathode in a lithium battery. The cathode was developed from titanium disulphide which has molecular spaces to house intercalate lithium ions. The battery’s anode, on the other hand, was partially developed from metallic lithium that has a strong drive to release electrons.  The only problem with the invention was that metallic lithium is reactive and the battery would be too explosive.

It was John Goodenough, who predicted that using metal oxide instead of a metal sulphide would make the cathode would viable. He developed a cathode in 1980 comprising cobalt oxide with intercalated lithium ions. 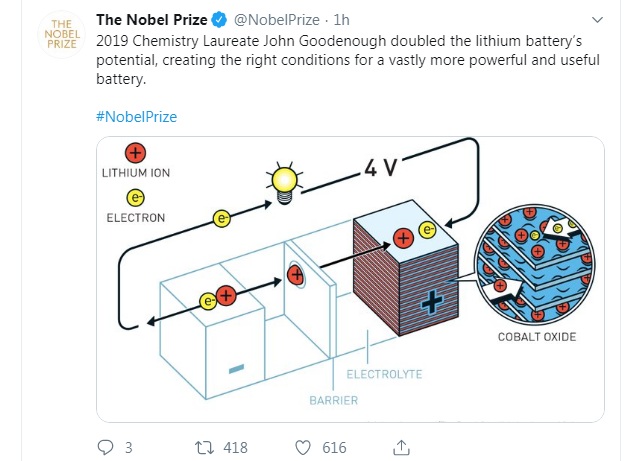 Keeping Goodenough’s cathode as a basis, Akira Yoshino created the first lithium-ion battery in 1985. Yoshino used petroleum coke to develop the anode instead of metallic lithium. This resulted in the development of a lightweight yet powerful rechargeable battery. 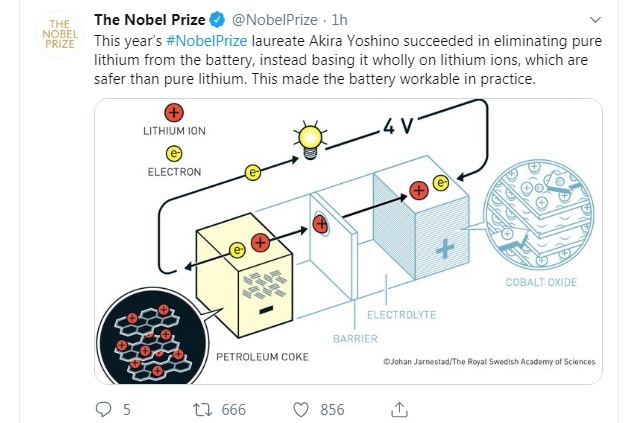 The youngest person to be honoured with the Nobel Prize in Chemistry was Frederic Joliot, who was 35 years old when he received the honour along with his wife Irene Joliot-Curie, who was the daughter of Marie and Pierre Curie.

The 2018 Nobel Prize in Chemistry was jointly awarded to Frances H. Arnold, George P. Smith, Sir Gregory P. Winter for the directed evolution of enzymes and the phage display of peptides and antibodies.