Omar Abdullah released: Former J &K Chief Minister Omar Abdullah's preventive detention has been revoked amidst the coronavirus outbreak. The order of release was issued by the Jammu and Kashmir administration on March 24, 2020.

The National Conference party leader was released today after more than eight months of preventive detention under Public Safety Act (PSA) following the revoking of Article 370 in Jammu and Kashmir.

While speaking to the media after his release, Omar Abdullah said that all people who have been detained should be released at this time. " We are fighting a war of life and death," he said. 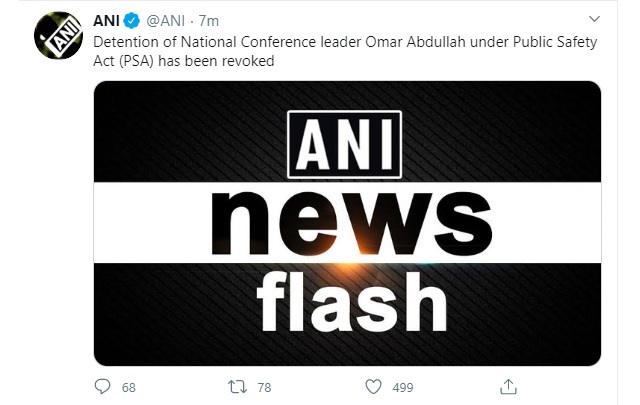 The former J&K Chief Minister was kept in preventive detention at his Hari Niwas residence in Srinagar. He was placed under the detention since August 5, 2020 when the special status of Jammu and Kashmir was revoked and the state was divided into two union territories. The senior politician was detained under the stringent Public Safety Act to prevent any sort of provocation or violence in the region. Other major J&K political leaders were also detained under the PSA act including Abdullah's father Farooq Abdullah and Peoples Democratic Party leader Mehbooba Mufti.

Will Mehbooba Mufti also be released?

Currently, there is no information regarding the PDP leader's release. The Jammu and Kashmir administration has not notified any decision regarding her release.  The former Chief Minister continues to remain under preventive detention.

Omar Abdullah's release comes almost two weeks after his father Farooq Abdullah, also a former Chief Minister of J&K was released from house arrest on March 5, 2020.  Many other J&K politicians were also released by the government in the last couple of months.