President’s rule in Maharashtra: Know all about it 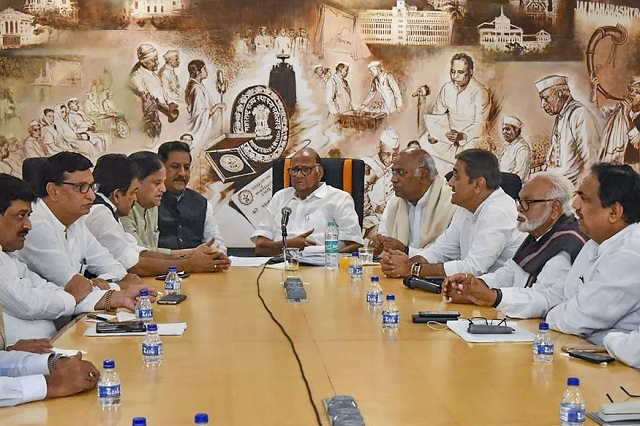 Maharashtra Governor Bhagat Singh Koshyar recommended the imposition of President’s rule in Maharashtra after Shiv Sena failed to prove the majority within its given deadline and the BJP refused to form government saying it had fewer numbers.

The recommendation file was sent by the Union Home Ministry for the President’s assent. President Ram Nath Kovind approved the proposal on November 12, 2019. 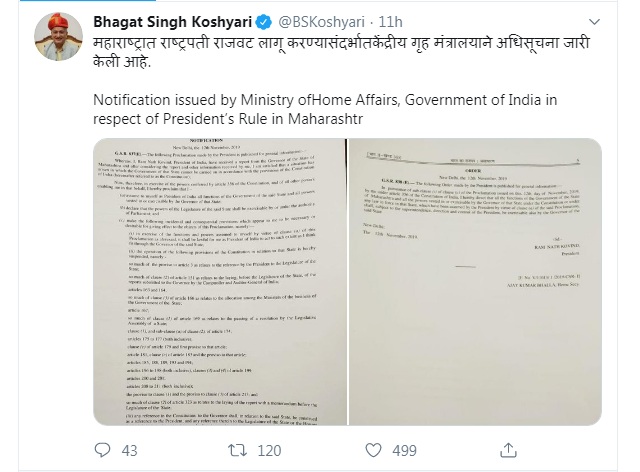 The President also approved the resignation of Shiv Sena MP Arvind Sawant from his post as the Union Minister of Heavy Industries and Public Enterprises. Prakash Javadekar has been given the additional charge of the Ministry.

Shiv Sena, the second-largest party in Maharashtra opposed the imposition of President’s rule, claiming that it was given less time to get majority support.

Shiv Sena has filed a writ petition under Article 14 & 21 of the constitution of India, challenging the governor's unconstitutional and unreasonable decision to reject the request for a deadline extension to submit letters of support.

The party has sought urgent relief from the court against the arbitrary action of the Maharashtra governor who in “hot haste” refused three days to the party to prove its majority to form government in the state.

The party argued that the Governor’s decision violated Article 14 and 21 of the Constitution. The Supreme Court is expected to take up the petition for hearing on November 13, 2019. The Shiv Sena is expected to file a second petition against the imposition of the President’s rule in the state on the same day.

President’s rule in Maharashtra: Know all about it

President’s rule has been imposed in Maharashtra for the third time since the state came into existence in May 1960. However, this is the first time that it has been imposed due to the inability of the political parties to coordinate and get majority support after state assembly elections.

What is President’s rule?

The President’s rule means direct rule of the central government and suspension of state government's rule.

When is President’s rule imposed in a state?

The President’s rule is imposed after invoking Article 356 of the Indian constitution. It is imposed on the recommendation of Governor in two cases:

1. In case of failure of constitutional machinery

2. If a state legislature is unable to function according to constitutional provisions

Why has President’s rule been imposed in Maharashtra?

The non-formation of government after assembly elections and political instability as a result of the failure of coalition and coordination is also considered as a failure of constitutional machinery.

What is the duration of President’s rule?

When can the President’s rule be revoked?

The President’s rule can be revoked whenever a party is able to prove its majority and submit letters of support.

When was President’s rule imposed in Maharashtra previously?

The President’s rule was first imposed in Maharashtra in February 1980 when Indira Gandhi’s government dismissed the PDF government headed by Sharad Pawar.

The President’s rule was imposed for the second time in the state when Prithviraj Chavan resigned as Maharashtra CM in September 2014 following the withdrawal of support by NCP to the Congress-led government.

The Shiv Sena chief Uddhav Thackeray in a press conference on November 12, 2019 said that the party had requested the Governor for 48 hours but its request was rejected. The Sena said that there were several issues upon which both the Congress-NCP needed clarity so it needed 48 hours to issue letters of support.

The Sena Chief, however, reiterated that they will be going ahead with their talks with the Congress and NCP over government formation in Maharashtra. Thackeray said that despite being from different ideologies, the parties will find a way to work together, just like the BJP has with Nitish Kumar and Ram Vilas Paswan, who also have a different ideology.

The Shiv Sena Chief also expressed pride in their Minister Arvind Sawant, whose resignation as the Union Minister of Heavy Industries and Public Enterprises was accepted by the President earlier today.

Shiv Sena claimed that its ally BJP had agreed on two and a half years of CM post while forming their pre-poll alliance. Now, the party said that the politics is headed in another direction entirely.

The Shiv Sena chief confirmed that the party will sit together with the Congress and NCP and hold consultations on the future of their course in forming government in Maharashtra. Thackeray said that they have six months now.

During the live press conference, the Congress and the NCP leaders stated that the Shiv Sena had made its first formal approach to them on November 11, 2019. The parties said that it was important for them to discuss on some crucial issues before taking any call. They said they needed more time and now they had enough time discuss all commonalities.