Shakib Al Hasan Record: Shakib Al Hasan has become the third cricketer in the world after Sachin Tendulkar and Mathew Hayden to score more than 600 runs in a World Cup series. 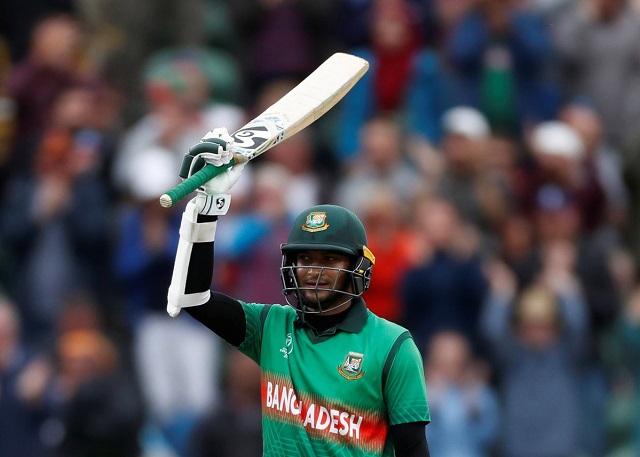 Shakib Al Hasan with his 66 runs against Pakistan on July 5, 2019 also became the first-ever batsman to make 8 consecutive 40+ scores in World Cup history. Shakib crossed half century in all of his 7 innings in ICC World Cup 2019. The only time he made 41 runs was against Australia.

Despite being a part of a team that got knockout out of the world cup tournament, Shakib currently leads the highest run scorer list in World Cup 2019 with 606 runs, overtaking Rohit Sharma who has 544 runs so far in this world cup. Shakib became the leading world cup run scorer with five fifties and two centuries.

The Test and T20 skipper of Bangladesh, Shakib Al Hasan has also became the first-ever player to have scored more than 500 runs and taken more than 10 wickets in a single World Cup. He also became the second player to score fifty and take a five wicket-haul in a world cup match after India’s Yuvraj Singh.

Shakib Al Hasan also created another record by taking 11 wickets in the world cup tournament, which is most by a spinner. This is the best-ever inidvidual performance in a Cricket World Cup. Shakib’s journey, however ended in the World Cup 2019 after Pakistan beat Bangladesh by 94 runs at Lord's on July 5. The match ended the World Cup campaign for both Bangladesh and Pakistan.

Shakib Al Hasan became the second player after Sri Lanka's Sanath Jayasuriya to score 1,000-plus runs and take 25-plus wickets in World Cups. He also became the fourth Bangladeshi batsman to complete 6000 runs in ODIs. He also became the fastest player to take 250 wickets and 6000 runs, getting there in 202 matches, overtaking Shahid Afridi, who achieved the same feat in 294 matches.