Virat Kohli is ranked last on this year’s Forbes list at the 100th spot, down from last year’s 83rd rank, despite an increase of $1m in endorsements. 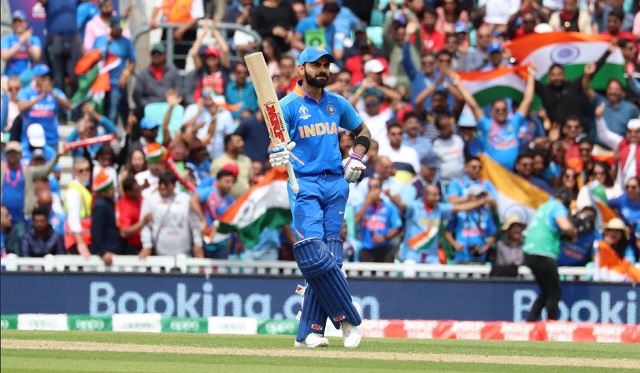 Indian skipper Virat Kohli is again the only Indian in the Forbes 2019 list of world's highest-paid athletes. The list, announced on June 11, 2019, is topped by Argentinean football star Lionel Messi.

Virat Kohli is ranked last on this year’s Forbes list at the 100th spot, down from last year’s 83rd rank, despite an increase of $1m in endorsements. According to the Forbes 2019 list, Virat Kohli earned a total of $25m in the last 12 months, including $21m through endorsements and $4m from salary and winnings, making him the highest paid Indian athlete.

The Indian cricket team captain currently leads the batting ranking in both International Cricket Council's Test and ODI rankings list. His popularity and current form has won him deals with some of the sport’s biggest brands.  He is one of the most-sought out cricketers across the globe, with fan following almost in each corner. Under his captaincy, team India, which is currently on a high in the 2019 cricket world cup, is at its formidable best.

• Messi, who scored 36 goals while leading his club Barcelona to win the La Liga title in 2019, earned a total of $US127 million in the last 12 months including $92m from salary and winnings and an additional $35m from endorsements, to move up to the top spot in the list of the world's 100 highest-paid athletes.

• Mayweather, who topped the Forbes list four times in seven years including in 2018, did not make it to the top 100 this year.

• Following Messi at the second rank is another popular football star, Portugal’s Cristiano Ronaldo. Ronaldo who made the much-talked-about move from Real Madrid to Juventus last season earned an estimated total of $109m in the last 12 months including $65m from salary and winnings and $44 through endorsements.

• It is the first time since Forbes began tracking athlete earnings in 1990 that footballers have taken up the top three spots.

• Brazilian star Neymar has total estimated earnings of $105m over the last 12 months including $75m from salary and earnings and $30m from endorsements.

• Swiss Tennis champion Roger Federer, who is fifth on the list, has a total estimated earnings of $US93.4 million, including $7.4m from salary and earnings and a whopping $86m from endorsements.

Notably, there is only one woman in the Forbes list of top 100 highest-paid athletes and that is Serena Williams, who is ranked at the 63rd spot. There were no women in the Forbes 2018 list but Williams made a comeback into it following her return from her maternity break. Williams’ total estimated earnings in the last 12 months stand at $29.2m, including $4.2m from salary and earnings and $25m through endorsements.