Birsa Munda: All you need to know about the tribal freedom fighter 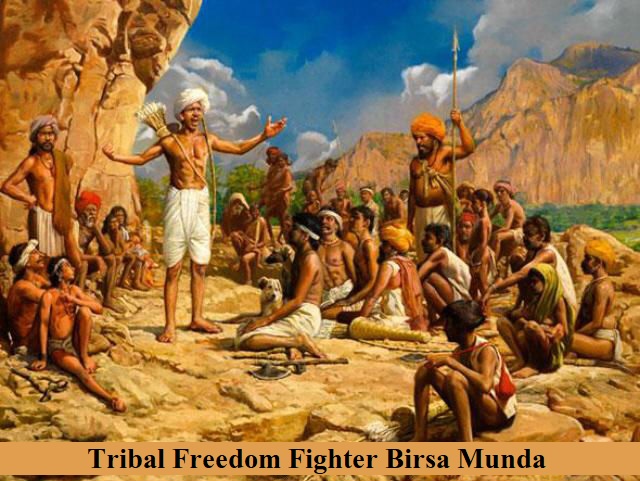 Birsa Munda was born on November 15, 1875, to Sugana Munda and Karmi Hatu in Ulihatu, Bengal Presidency (Present-day Jharkhand). He was born on Thursday, hence, as per Munda tribe customs, he was named after the day. Birsa Munda's family moved to Kurumbda and then to Bamba in search of the employment, either as labourers or crop-sharers.

Due to poverty, Birsa Munda was sent to his maternal uncle's village-- Ayubhatu. Munda lived at Ayubhatu for two years and was surrounded by Christian missionaries. These missionaries attacked the old Munda order and wanted to convert people into Christianity. At Ayubhatu, Birsa went to a missionary school and his teacher encouraged him to study further. He was advised by his teacher to enrol in German Mission School, but to get admitted, Munda was forced to convert to Christianity. He was renamed as Birsa David and later to Birsa Daud after the conversion. Birsa left the German Mission School after studying for a few years.

During 1886-1890 (the period of German and Roman Catholic Christian agitation), Birsa stayed at Chaibasa, but in the wake of freedom struggle, Munda's father withdrew him from school and left the place. The family also renounced Christianity and reverted to their original tribal religious customs.

On his temporary stay, Birsa found a suitable companion in the neighbourhood village Sankara. He presented her parents with jewels and explained the reasons behind his idea of marriage. However, on his return from jail, he didn't found her loyal and left her. The daughter of Mathura Muda (kept by Kali Munda) and wife of Jaga Munda insisted Birsa on becoming his wives, to which he rebuked. Sali from Burudih stayed with Munda for a long time. When Birsa Munda grew old, he stressed monogamy. Birsa was jailed due to a rumour that the people who will not follow Birasait would be massacred.

Birsa Munda and his new religion

Birsa Munda was also a founder of a new religion called Birsait. The religion believed in one God and encouraged them to revert to their original religious beliefs. People started referring to him as an economical religion healer, a miracle-worker and a preacher. People belonging to the tribe of Mundas, Oraons and Kharias moved together to visit the new prophet and to find a cure to their problems. People belonging to  Oraon and Munda became convinced Birasaities. People started referring him Dharti Abba. Several contemporary and folk songs reveal his influence over the people of various tribes.

Birsa Munda not only preached the new religion but also mobilised people and formed the Guerrilla Army to end British Raj. His slogan threatening the British Raj is still remembered today in the states of Odisha, Bihar, West Bengal and Madhya Pradesh. The slogan was 'Abua raj seter jana, maharani raj tundu jana' which means 'Let the kingdom of the queen be ended and our kingdom will be established'.

In the late 1890s, Birsa Munda abolished the feudal system introduced by the Britishers in the Adivasi forest. Under this system, migrants from other states were invited by the British to work over tribal lands and to pocket all the profits. This, in turn, deprived the owners of their proprietary rights over the land and were left with no means of livelihood. Thus, due to the agrarian breakdown and culture change, Birsa along with his tribe revolted.

In 1895, Birsa asked his fellow tribesman to renounce Christianity and guided them to worship one God and showed them the path of purity, austerity and prohibited cow- slaughters. He further claimed himself to be a prophet and stated that reign of Queen Victoria was over and the Munda Raj has begun. His followers declared that the British were their real enemies and not the Christian Mundas.

The followers of Birsa Munda started a series of attack on several places loyal to the British (police station, shops, etc.). They also killed two police constables, razed the houses of local shopkeepers, attacked commissioners and deputy commissioners. The British in return set a reward of Rs. 500 on Birsa Munda and sent an army of 150 people to crush the rebellion. The forces gheraoed the Guerrilla Army at Dumbari Hills and killed hundreds of people. Birsa managed to escape but was later on arrested and sent to jail.

During his trial in the prison, Birsa Munda died on June 9, 1900. The movement faded out after his death. Eight years after his death in 1908, the colonial government introduced the Chotanagpur Tenancy Act (CNT). This Act prohibited the transfer of tribal lands to non-tribals and protected the proprietary rights of the owners.

Birsa Munda and his legacy

In 2004, Ashok Saran made a Hindi film 'Ulgulan-Ek Kranti' and 500 Birsaits appeared as extras in the movie. In 2008, another film 'Gandhi se Pehle Gandhi' based on the novel on the life of Birsa Munda and was directed by Iqbal Saran (author of the novel).

Mahasweta Devi wrote a novel 'Aranyer Adhikar' on the life of Birsa Munda and his rebellion against British Raj. The novel won her the  Sahitya Akademi Award for Bengali in 1979.

150-foot-tall Statue of Ulgulan (Birsa Munda) is proposed to be built in Jharkhand. The stones to be used in the statue are collected from the local houses of the area.