Citizenship Act of 1955: Provisions and Amendments

The Citizenship Act, 1955 and its Amendments deal with the acquisition and termination of citizenship in India. Moreover, the Constitution has also provided citizenship rights for Overseas Citizen of India, Non-Resident Indians, and Persons of Indian Origin.

The term citizenship refers to the enjoyment of full membership of any community or state in which a citizen; enjoys civil and political rights. It can be defined as a legal relationship of an individual with a particular state which is expressed by pledging his loyalty towards state and by carrying out duties like paying taxes, serving in the army during need, respecting national principles and values etc.

The Constituent Assembly incorporated a generalized provision through Article 11 for the Parliament to regulate the citizenship by law. However, when it adopted the Constitution it brought into force Part 2 of Constitution for Citizenship with Articles 5-11 dealing with it which states as follows:

Article 5 states that “every person” who has a domicile in the territory of India and:

Article 6: Rights of Citizenship of certain persons who have migrated to India from the territory now included in Pakistan shall be deemed to be a citizen of India at the commencement of this Constitution

Article 7: Rights of Citizenship of certain migrants to Pakistan is a special provision for persons who have migrated to Pakistan after March 1, 1947, but returned to India subsequently.

Article 8: These are the Rights of Citizenship of certain persons of Indian origin residing outside India for the purpose of employment, education, and marriage

Article 9: Persons who voluntarily acquire citizenship of a foreign state will not be citizens of India.

Article 10: Every person who is a citizen of India under any provisions of this part will be subject to any law enacted by the Parliament.

Citizenship Act of 1955 and its Amendments

1.         Citizenship Act of 1955 deals with the acquisition and termination of citizenship after the commencement of the Constitution. The provisions under it include:

•           Foreigners could acquire Indian citizenship by naturalization on certain conditions

•           If any territory becomes part of India, the Government of India could specify the conditions for them becoming citizens

•           Citizenship could be lost by termination, renunciation, deprivation on certain grounds

2.         The Citizenship (Amendment) Act of 1986: This act specifically deals with the citizenship of the state of Assam. It mentions those illegal migrants to get citizenship to need to be registered with the Indian consulate in the prescribed format.

3.         The Citizenship (Amendment) Act of 1992: According to this Act any person born outside India is considered a citizen of India by virtue of Citizenship by Descent if either of the parents was a citizen at the time of his birth.

4.         The Citizenship (Amendment) Act of 2003: This Act introduces several provisions for overseas citizens regarding their registration, rights in India etc.

5.         The Citizenship (Amendment) Act of 2005: This Act is based on the recommendations of the Parliamentary Standing Committee on Home Affairs. It provides for dual citizenship to PIO of 16 countries.

Modes of acquisition of Citizenship

Loss of Citizenship in India

The Citizenship Act of 1955 deals with the loss of citizenship also in addition to acquisition. Accordingly, it is carried by the following means:

According to the Citizenship (Amendment) Act of 2003, an overseas citizen of India includes a person: 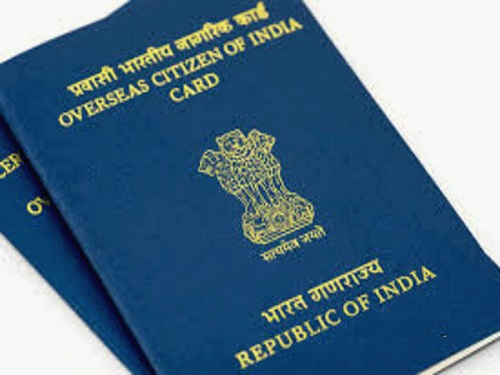 An NRI is a citizen of India who holds an Indian passport and has temporarily immigrated to other countries either for employment or education or any other purpose.

A PIO is a person of India origin whose parents or grandparents are citizens of India but he is not a citizen of India but of other countries.