Five Eyes Countries Economic Pact: The Five Eyes alliance is planning to create a trusted supply chain among its member nations to end reliance on China. 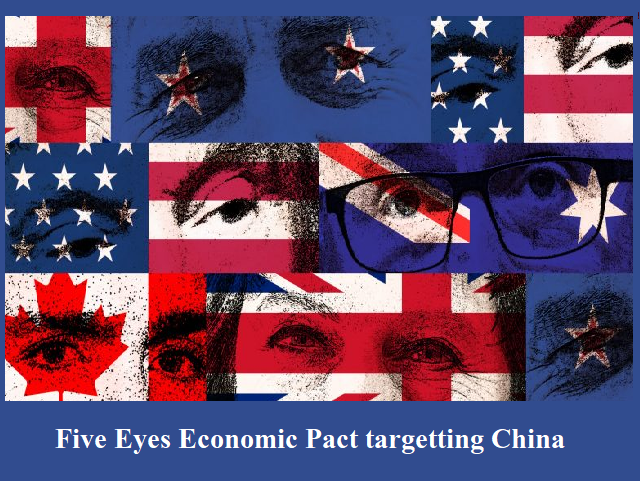 The biggest intelligence network of the world, Five Eyes alliance want to end Western reliance on China. The intelligence partners want to form a deeper relationship with each other to create trusted supply chains. With an eye on China, the US Congress has sought to add three other democratic countries-- India, Japan and South Korea-- at par with its FVEY intelligence sharing. In addition to this, various leaders of the Five Eyes have confirmed that the alliance will be used for both economic as well as strategic purposes.

Coronavirus Pandemic: What is Five Eyes Network and what does its dossier comprise of?

As per the UN's international trade data, amongst all the Five Eyes alliance countries, Australia is the most dependent country and imports 595 different goods from China, ranging from pens, pharmaceuticals to garlic.

India is also dependent on China to fulfil 90% of its API requirements. As per data compiled by the Deutsche Bank's dbDig, China is likely to reach tech parity with the United States between 2025-2030.

How will Five Eyes end reliance on China?

The Five Eyes alliance is planning to create a trusted supply chain to end the reliance on China. The alliance will start manufacturing and selling commercial goods in the member countries. This will include every stage from the supply of materials to its production, distribution and sale. The successful supply chain is very crucial for any company planning to compete with other companies.

What is the Five Eyes network?

The Five Eyes (FVEY) network is an intelligence alliance between Australia, Canada, New Zealand, United Kingdom and the United States. As per a former NSA contractor Edward Snowden, the Five Eyes is a 'supra-national intelligence organization' and is not accountable to the laws of its countries.

The Five Eyes was primarily formed to handle the global threats mainly from the Soviet Union, China and several other eastern European countries. In the following years, Canada, Australia, and New Zealand were added and the agreement is known as Five Eyes Alliance. Canada became a part of Five Eyes in 1948 while Australia and New Zealand became its part in 1956.

Country-wise coverage of the Five Eyes

4- Australia: Australia is responsible for South and East Asia.

5- New Zealand: New Zealand is responsible for monitoring Southeast Asia,  South Island at Waihopai Valley, south-west of Blenheim, and on the North Island at Tangimoana.

The Nine Eyes network consists of the UK, the US, Canada, Australia, New Zealand, Denmark, France, the Netherlands and Norway.

Previously, the Five Eyes was in the news when an Australian newspaper 'The Daily Telegraph' made a 15-page dossier public. The dossier comprises the detailed investigation on the deadly COVID-19 pandemic which was first identified in China's Wuhan.