15 Famous Indian Personalities and their Autobiographies

Famous Indian Personalities and their Autobiographies: Biographies of famous personalities are always a source of Inspiration. The biographies will tell you about the controversies, the dark sides of a person that you may have never heard of. 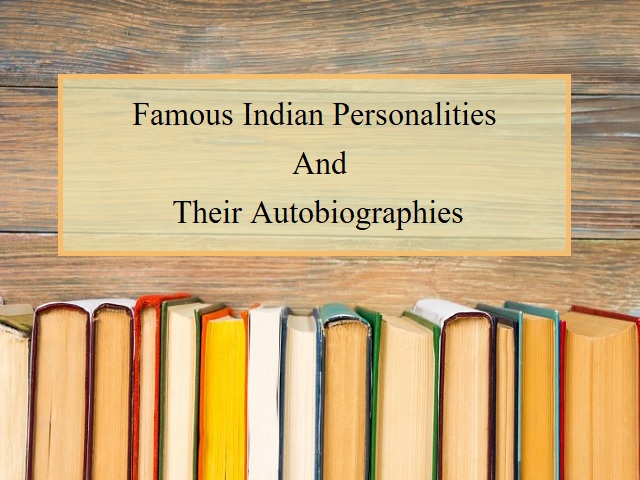 Famous Indians and their Autobiographies

Biographies of famous personalities are always a source of Inspiration. The biographies will tell you about the controversies, the dark sides of a person that you may have never heard of. Some people write biographies to clear up the myths about them while others invite criticism. Here's a list of the life stories of the prominent people that you must read.

In 1940, Father of Nation, Mohandas Karamchand Gandhi wrote his autobiography 'The Story of My Experiments with Truth' where he covered his life from childhood days to 1921. In 1998, a committee of global spiritual and religious authorities designated it as one of the "100 Best Spiritual Books of the 20th Century".

2- An Autobiography by Jawaharlal Nehru

In 1936, Jawaharlal Nehru published an autobiographical book 'An Autobiography' which is also known as 'Toward Freedom'. The book is written in prison (1934-1935) before Nehru became the first Prime Minister of India.

3- Autobiography of a Yogi by Paramahansa Yogananda

In 1946, Indian Yogi and Guru, Paramahansa Yogananda published his autobiographical book 'Autobiography of a Yogi'.

In 1973, the first female High Cout judge of India, Anna Chandy published her autobiography 'Atmakatha' in the Malayalam language.

During 1935-36, Indian jurist, economist, politician and social reformer, B.R. Ambedkar wrote a 20-page autobiography in his own handwriting about his experiences with untouchability. It is currently used in Columbia University as a textbook.

In 2014, Justice B.V. Acharya published his autobiography 'All from Memory' where he recalls his childhood and student days providing a glimpse of life in his early days.

In 2011, former Chief Minister of Madhya Pradesh started writing his autobiography 'A Grain of Sand in the Hourglass of Time' but died on March 4, 2011, before completing it. The autobiographical book was then completed by Ashok Chopra. Ashok is a publisher, author, editor, and literary columnist by profession.

In the 16th century, the founder of Mughal Empire and first Mughal Emperor in the Indian Subcontinent,  Ẓahīr-ud-Dīn Muhammad Bābur wrote 'Baburnama' also known as 'Tuzk-e Babri' in Turki language.

In 2013, Indian General Vijay Kumar Singh wrote an autobiography 'Courage and Conviction' where he had alleged corruption in the Indian Government.

In 1973, Indian English Poet, Kamala Surayya published her autobiography 'Ente Katha (My Story)' while she was ill and thought that wouldn't survive.

In 1950, Tamil Scholar & researcher, U. V. Swaminathan Iyer published his autobiography 'En Sarithiram' about the life and times of villages, especially in the Thanjavur district in the late 19th century.

12- How I Became a Hindu by Sita Ram Goel

In 1982, writer, publisher, Indian religious and political activist, Sita Ram Goel wrote his autobiographical book 'How I Became a Hindu'. During 1946 Calcutta killings, Goel "would have been killed by a Muslim mob" if he didn't have a command over Urdu and the Western clothes he wore averting any "suspicion" he was actually Hindu.

In 1982, famous filmmaker, Satyajit Ray published his autobiography 'Jakhan Choto Chilam' which means 'In my Childhood' where he wrote about his childhood days in Calcutta (present-day Kolkata).

15- A Shot at History by Abhinav Bindra

In 2011, Indian Shooter and Gold medalist Abhinav Bindra published an autobiographical book 'A Shot at History: My Obsessive Journey to Olympic Gold'.

These were some of the famous autobiographies that a person must read to understand the famous personalities or history or several unjust social practices.