Katherine Johnson was a mathematician at NASA and her work helped send astronauts to the Moon. She calculated the trajectory for America's first trip to space. According to NASA Administrator Jim Bridenstine, she died on 24 February, 2020 at the age of 101. Let us have a look at Katherine Johnson’s early life, education, family, and her works.

Katherine Johnson played a historical role as one of the first African-American women to work at NASA scientists. She was born on 26 August, 1918, White Sulphur Springs, West Virginia, U.S. As an American mathematician she calculated and analysed the flight paths of several spacecraft for U.S. space program for more than three decades.

Katherine Johnson or Katherine Coleman is also known as Katherine Goble. She was born to Joylette and Joshua Coleman's house and was the youngest of four children. Her father was a farmer and mother was a teacher. From an early age, she had a strong interest in maths. At the age of 10, she had attended high school. At the age of 18 in 1937, she had done his graduation with highest honours from West Virginia State College (now West Virginia State University). She earned bachelor's degrees in mathematics and French. At Virginia, she took the teaching job. In 1939, she was selected to be one of the first three African American students by the West Virginia State's president, Dr. John W. Davis to enroll in a graduate math program at West Virginia University. Due to it, she left the teaching job.

At the end of the first session of the math program, she got married to James Goble and decided to leave the program. When her daughters became older she returned to teaching. In 1952, her relative told about open positions at the all-black West Area Computing section at the National Committee for Aeronautics'(NACA's) Langley Laboratory that was headed by fellow West Virginian Dorothy Vaughan.

Katherine and her husband decided to move the family to Newport News, Virginia. In 1953, Katherine started working at Langley. After two weeks of working, Dorothy Vaughan assigned her a project in the Maneuver Loads Branch of the Flight Research Division and the temporary position of Katherine became permanent. She spends four years in analysing data from flight tests and worked on the investigation of a plane crash that was caused due to wake turbulence. In December 1956 when she was raping her work, her husband died due to cancer.

Johnson's life changed in 1957 with the launch of the Soviet satellite Sputnik. In 1957, she provided some of the 1958 math document Notes on Space Technology. These are the notes of a compendium series of 1958 lectures given by the engineers in the Flight Research Division and the Pilotless Aircraft Research Division (PARD).

She was known as the West Computers analysed test data and provided mathematical computations that were essential to the success of the early U.S. space program. NACA was segregated at that time and the West computers had to use separate bathrooms and dining facilities.

In 1958, NACA was incorporated into the newly formed National Aeronautics and Space Administration (NASA) and banned segregation. That is NACA was changed to NASA. Katherine in NASA was a member of the Space Task Group. For America’s first human spaceflight, she did trajectory analysis for Alan Shepard’s May 1961 mission Freedom 7. In 1960, she with an engineer Ted Skopinski co-authored Determination of Azimuth Angle at Burnout for Placing a Satellite over a Selected Earth Position. They described the equations of an orbital spaceflight in which the spacecraft's landing position is specified.

Note: It was the first time a woman received credit as an author of a research report in the Flight Research Division.

During her career, she authored and co-authored around 26 research reports. She calculated the path of the spacecraft Freedom 7 that put the first U.S astronaut in space, Alan B, Shepard, Jr. Katherine Johnson in 1962 was called upon to assist with John's Glenn's orbital mission by using a desktop mechanical calculating machine to control the trajectory of the capsule on Glenn's Friendship 7 mission. Subsequently, Glenn created history aboard Friendship 7 and became the first U.S. astronaut to orbit Earth.

She also played an important role in NASA's Mercury program (1961-63) of manned spaceflights.

In the Apollo mission 1969, Katherine Johnson was also a part of the team to calculate where and when to launch the rocket. It sent the first three men to the Moon. Later, she also worked on the space shuttle program. In 1986, she retired from NASA after providing 33 years of service.

She received several awards and honours for her work.

- NASA in 2016 named a building, the Katherine G. Johnson Computational Research Facility, after her.

- In 2016 a film Hidden Figures that was based on a book was released. Hidden Figures: The American Dream and the Untold Story of the Black Women Mathematicians Who Helped Win the Space Race, about the West Computers, including, Dorothy Vaughan, and Mary Jackson. 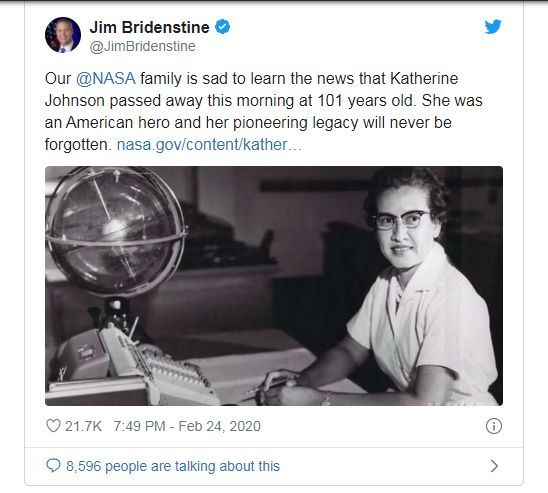 The Administrator of NASA, James Bridenstine said "Our NASA family is sad to learn the news that Katherine Johnson passed away this morning at 101 years old. She was an American hero and her pioneering legacy will never be forgotten."