Kenya's Lamu Port: Here's all about another Chinese-built port in the Indian Ocean

Kenyan President Uhuru Kenyatta launched Lamu Port, the country's newest mega infrastructure project, on May 20, 2021. The project is a part of the LAPSSET corridor which has been constructed by China Communications Construction Company. 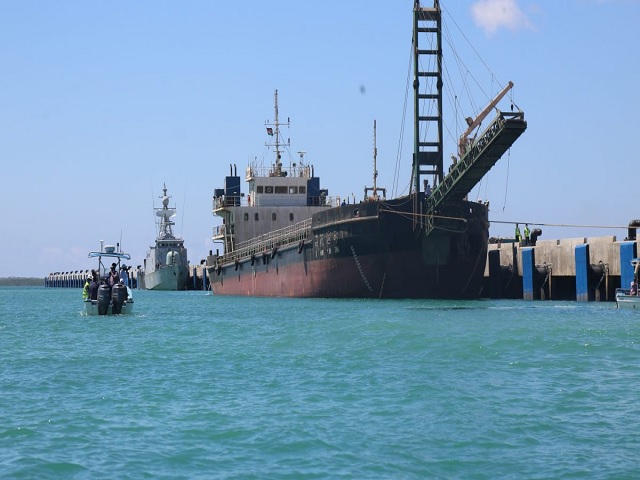 According to the officials, full-scale operations will begin in July 2021. So far, only two Maersk Shipping Company-operated vessels-- MV Seago Bremerhaven and MV Cap Carmel-- are docked at the Lamu Port. It is designed to have 32 berths. The work of the first berth is 100% complete while the second and third berth is expected to be ready by July and October 2021. The cost of the first three berths is projected to be Sh40 billion.

Branded as a 'Game changer' project, Lamu Port is a part of the wider US $23 billion Lamu Port South Sudan-Ethiopia Transport (LAPSSET) corridor which has been constructed by China Communications Construction Company.

The transport corridor is touted to comprise of a standard gauge railway line, an oil pipeline and refinery, road network, international airports at Isiolo, Lamu, Lokichogio, the port of Lamu at Manda Bay, and resort cities.

What is the Necklace of Diamonds Strategy?

In the mid-1970s, then Kenya's Ministry of Power and Communications embarked on a study to set up a deep-water port on the Kenyan coastline. The plans for a second deepwater port arose to reduce the economic dependency and strain on the Mombasa Port due to rising business volumes and demand.

The port also intended to connect the landlocked East African countries to global trade routes, help develop alternative routes, and handle the impending population boom in the future. However, due to political, financial and other reasons, the project was halted for almost 30 years.

The project was revived in 2012 when the then President and Prime Minister of Ethiopia, South Sudan, and Kenya laid the Lamu Port’s foundation stone with all three countries agreeing to fund the project. The Lamu Port project and the LAPSSET corridor has the potential to spur economic development in the region.

Prospects of the Lamu Port

The Lamu Port aims at boosting Kenya as a transport and logistics hub for both East Africa and the Horn of Africa region. It will serve as a key transhipment hub and will attract key shipping lines by competing directly with the ports of Durban in South Africa and Djibouti in the Horn of Africa. Additionally, it will also handle large container ships that are unable t dock at Mombasa Port. The Lamu Port is predicted to receive a traffic of 23.9 million tons by 2030, inclusive of demand from both South Sudan and Ethiopia.

It is to be noted that Lamu Port has a depth of 17.5 metres as opposed to Mombasa which is 15 metres deep.

In a bid to encourage the use of this facility, the Kenya Ports Authority and the Kenya Revenue Authority have jointly announced a host of incentives. These include:

The Kenyan Government has continuously argued in favour of the economic viability of this facility. The project will reduce the distance between Kenya-South Sudan and Kenya-Ethiopia, thereby lowering the cost of transportation. Also, it will help Kenya in gaining access to markets for its products and generate revenue from cargo transiting through this facility to other countries.

Experts are flagging the Lamu Port project as they believe that it could become another white paper project due to the uncertainties around its use, along with the security concerns in the region. Lamu is a highly volatile region that is often targeted by militant organizations such as Al-Shabaab.

Also, the Kenyan Government has decided to push business to Lamu Port which in turn could reduce revenues for Mombasa Port and consequently indebt Kenya to Chinese loans. Kenya took a loan from China for the construction of the Standard Gauge Railway (SGR) project.

In addition to the above, the construction of Lamu Port has raised concerns around land rights, the environment, local livelihoods, and security. The project may also disrupt artisanal fishing, the main source of income for almost 70% of Lamu's population, thereby threatening local fisherman's livelihood.

The operationalisation of this facility comes at a time when the long-term viability of the Belt and Road Initiative (BRI) of China has come under scrutiny amid the ongoing COVID-19 pandemic. It is well established that Chinese entities have financial, constructional and operational involvement in 46 Sub-Saharan African ports.

With this, China not only has access to more markets but has more political leverage, thereby empowering the security activism of its navy, and establishing a dependency on Chinese technology and expertise.

The timely construction of the said project will not only strengthen China as a development partner but also boost its political influence and contribution towards regional GDP growth.

There's an ongoing geostrategic competition between regional and extra-regional powers competing to secure military access and mobility across the region. China is already expanding its footprint in the Indian Ocean with its 'Debt Trap Diplomacy' and 'String of Pearls Strategy'. With Lamu Port as the latest addition, China has another port facility in the Indian Ocean to access without impediments and project its power capabilities.

Why is China expanding its military footprints in the Indian Ocean?