The term BRIC was coined for the first time by the Goldman Sachs in 2001. Later on, this is expanded to BRICS in 2010. The BRICS comprises 5 developing nations i.e. Brazil, India, Russia, China, and South Africa. 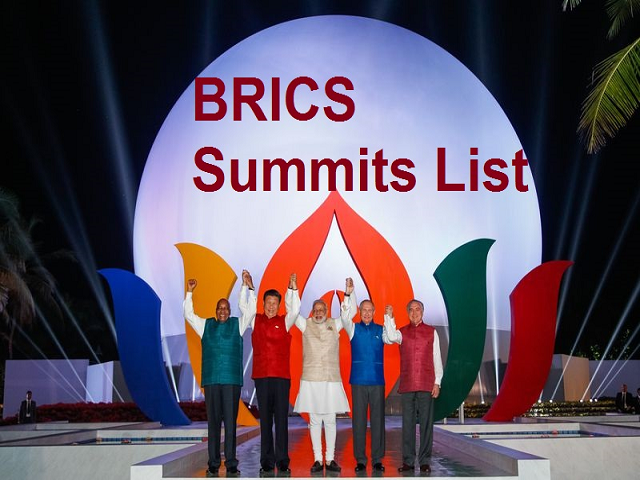 Global exposure: Comprises 43% of the world population, 17% share in the world trade.

The term "BRIC" was coined by then-chairman of Goldman Sachs Asset Management, Jim O'Neill in 2001.

Lists of Nobel Prizes and Laureates 2019

Since 2009, its summits are held annually and till date 11 summits have been held. The latest summit of the BRICS is held at Brasília (Brazil) on 13–14 November 2019. Its meeting is chaired by the Brazilian President Jair Bolsonaro.

The theme of the 11th BRICS summit 2019 is ‘BRICS: Economic Growth for an Innovative Future’.

Let us have a look on the list of BRICS summits;

The above table shows that India has hosted the BRICS summits two times; first in 2012 and second in 2016. The next BRICS summit will be held in Saint Petersburg Russia in July 2020 and it will be headed by Vladimir Putin.

The fourth BRICS Summit held in New Delhi (2012) paved the way for the establishment of a bank that can mobilize resources for infrastructure and sustainable development projects in BRICS members.

After the consideration at New Delhi summit, the BRICS Bank or the New Development Bank (NDB) was established on 15 July 2014.

Its initial authorized capital of US$ 100 billion. Its headquarter is located in Shanghai, China and K. V. Kamath is the first President of the New Development Bank.

So this was the complete list of BRICS summits held till date. Click below to read such more topics…