The Nizams ruled over Hyderabad for two centuries and played key roles in many historical events in India. Check here the full list of Nizams of Hyderabad from 1724 to 1948.

Hyderabad is one of the most liveable and prosperous cities of India. Situated in the Southern region of India, Hyderabad is the capital of the Telangana and boasts a booming economy, flourishing IT industry, and low crime rates.

But do you know that Hyderabad was also the capital of the princely state of Hyderabad for almost two hundred years? The state of Hyderabad, now comprising the Indian states of Telangana and Andhra Pradesh, was governed by the Nizams for over two centuries from 1724 to 1948.

Read on to learn more about the rich heritage of Hyderabad and the list of Nizams of Hyderabad from 1724 to 1948.

Who were the Nizams of Hyderabad?

Nizam, shortened from Nizam-ul-Mulk, and also called Asaf Jah, means the “Administrator of the Realm.” The first Nizam of Hyderabad was Mir Qamar-ud-din Khan Siddiqi  Bayafandi. Mir Qamaruddin was a General of in the Mughal Empire and had friendly relations with Aurangzeb.

Mir Qamaruddin became the Viceroy of the Deccan after the death of Aurangzeb and governed Mughal provinces in south India from 1714 to 1719. After rebelling against Mughal emperor Muhammad Shah, Mir Qamaruddin proclaimed himself the Nizam of Hyderabad. He was conferred the title of Asaf Jah by Muhammad Shah in 1925. The Nizam rule came to an end after Hyderabad’s accession to India in 1948.

The Asaf Jahi dynasty produced 7 rulers or Nizams of Hyderabad. After the demise of Asaf Jah I, his sons, Nasir Jung and Salabat Jung and grandson Muzaffar Jung ruled for a few years each but were not recognized as the Nizam-ul-Mulk. Ultimately, Mir Nizam Ali Khan, son of Asaj Jah I, succeeded his father and was bestowed with the title of Asaf Jah II. Here is the list of officially recognized Nizams of Hyderabad of the Asaf Jahi dynasty.

Mir Qamar-ud-din Khan Siddiqi was a general in the Mughal empire and friends with Aurangzeb. Mir Qamaruddin’s family traced its origins to present-day Uzbekistan, and he was also a descendant of Abu Bakr, the first caliph of Islam. Following the death of Aurangzeb, Mir Qamaruddin took advantage of the war of succession between Aurangzeb’s sons and manoeuvred his position to become the permanent ruler of the Deccan. He was later given the title of Asaf Jah by Mughal Emperor Muhammad Shah and thus began the Asaj Jahi dynasty.

Asaf Jah’s death in 1748 caused political turmoil in Hyderabad, and his sons Nasir Jung and Muzaffar Jung and grandson Salabat Jung ruled for 14 years in his stead. However, neither was officially recognized. Mir Qamaruddin’s fourth son, Mir Nizam Ali Khan Siddiqi ascended to the throne in 1962 after routing Salabat Jung, and reigned for nearly half a century until 1803. Asaf Jah II was known as a fierce military leader who won many battles against the Marathas. However, he was later defeated in the Battle of Rakshasbhuvan by Madhavrao I and Rughunathrao. 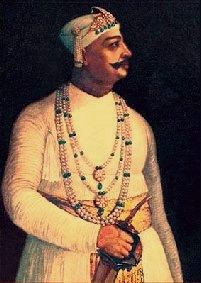 Nawab Mir Akbar Ali Khan Siddiqi Bahadur, Sikander Jah, was the second son of Asaj Jah II and succeeded his father as Asaf Jah III. He is known for his peaceful but financially lagging reign. Asaf Jah III also spread communal harmony among religions by commissioning a Sikh regiment in his army and building the Rambagh temple in Hyderabad.

Mir Faqunda Ali Khan succeeded his father Asaf Jah III as the Nizam of Hyderabad in 1829 and ruled until his death in 1857. Asaf Jah IV inherited a financially weak kingdom but still developed Hyderabad through loans from the Arabs, Rohillas, and the British. He ultimately ceded part of his territory to the British to liquidate all of his debts.

Afzal ad-Dawlah succeeded his father, Mir Faqunda, as Nizam of Hyderabad and Asaf Jah V. His reign was marked by widespread peace and little turmoil. Asaf Jah V reformed the judicial systems, constructed the first rail and telegraph networks, and established the Hyderabad Medical School, which later became the Osmania Medical College. He died at the age of 41 in 1869, just 12 years after becoming Nizam.

Mir Mahboob Ali Khan Siddiqi was the youngest Asaj Jahi Nizam and ascended the throne at just two years and seven months old. He was the first Nizam to receive western education and governed his state with a modernized approach. Asaf Jah VI took serious measures to abolish the abhorrent practice of Sati in his kingdom. The Nizam also sanctioned several administrative reforms and made significant contributions to the development of Hyderabad's railways. He died of a sudden stroke in 1911 at the age of 46.

Mir Osman Ali Khan was the last official Nizam of Hyderabad and was deposed in 1948 after Hyderabad’s incorporation into Independent India. Asaf Jah VII was the richest man in India at the time, with an estimated net worth of over $200 billion. He wanted to remain independent and rule Hyderabad but was forced to abdicate his throne. Asaf Jah VII was designated as His Exalted Highness for his contributions of £25 million to the British during World War I. Asaf Jah VII lived an extravagant life and used a 185-carat diamond as a paperweight. The Nizam was a visionary as well, establishing the Osmania University in Hyderabad and being the first to separate the judiciary from the executive in 1921.

After Hyderabad’s ascension to India in 1948, the Nizam rule was disbanded. However, title of Nizam of Hyderabad was passed on to Mukarram Jah, grandson of the last Nizam, Mir Osman Ali. Like his predecessors, Mukarram Jah was also the richest man of India, at least until the 1980s. Jah was a pretender Nizam and had no powers. He resided in Istanbul, Turkey for most of his later life and passed away on January 15, 2023.

Officially Recognized Nizams of Hyderabad of the Asaf Jah Dynasty

Who was the first Nizam of Hyderabad?

Mughal general Mir Qamar-ud-din Khan was the first Nizam of Hyderabad. Mir Qamar defected from the Mughal empire and established his own dynasty, proclaiming himself Nizam-ul-Mulk of Hyderabad. He was bestowed the title of Asaf Jah by Mughal emperor Muhammad Shah.

Who was the last Nizam of Hyderabad?

Mir Osman Ali, Asaf Jah VII was the last official Nizam of Hyderabad. He presided over the state till 1948 when he was forced to accede to India rather than stay independent. However, Mukarram Jah was the unofficial successor of Asaf Jah VII and ruled from 1967 to 2023.

How many Nizams of Hyderabad are there?

There have been seven official Nizams of Hyderabad in history, each of whom was bequeathed with the title of Asaf Jah. The Nizam rule ended in 1948 with the surrender of Asaf Jah VII to India, and his successor Mukarram Jah was the Nizam only in title. He possessed no powers or authority to govern the state.
Get the latest General Knowledge and Current Affairs from all over India and world for all competitive exams.