At the time of its independence, India was divided into 565 indigenous princely states. All Indian princely state agreed to join the Indian federation except Hyderabad, Junagadh, Bhopal and Kashmir.

Junagadh state had declared its merger with Pakistan and Kashmir expressed its desire to remain independent. Although the principality of Bhopal did not want to join Indian federation but later on it joined Indian federation.

Hyderabad princely state was located in the Deccan plateau. The state of Hyderabad was quite prosperous. The size of Hyderabad state was equal to Italy.  Its last Nawab was 'Nizam Osman Ali Khan'. Hyderabad is currently the joint capital of Telangana and Andhra Pradesh. 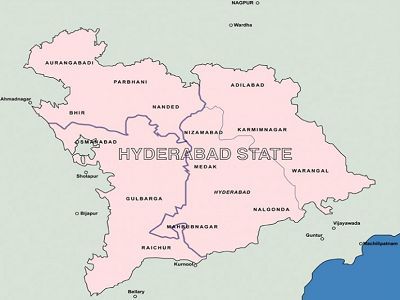 According to a report by the British newspaper 'The Independent', the total assets of Nizam (1886-1967) of Hyderabad was around $ 236 billion, while according to Forbes list 2018, Mukesh Ambani is the world's 19th richest person with estimated assets of 49 billion dollars.

As per Forbes-2018 list world's richest man, Jeff Bezos, has net worth of $ 112 billion. So if we go by the Forbes estimation; Osman khan would have been the richest man of the world in 2018.

Other achievements of the Nawab Osman Ali Khan are as follows;

1. In 1911, he was awarded the title of the Knight Grand Commander of the Star of India.

2. In 1917, he was awarded the title of the Knight Grand Cross of the British Empire.

Nawab founded Osmania University, Hyderabad in 1918. Nizam was a patriotic person who gave five tonnes (5000 kg) gold to the Indian National Defense Fund during the war of 1965 from China. Today, the price of this gold is more than 1600 crores. Keep in mind that this was the same Nizam who never wanted to join Indian federation.

Surprisingly, despite being so rich the Nizam was a very miser person. It is said that Nizam never used to wear pressed clothes and he wore the same hat for 35 years. Nawab used to eat food in a tin plate. He also used to drink very cheap cigarettes and even he used to beg cigarettes from his guests. More surprisingly, the Nizam never bought a full pack of cigarettes.

After India's independence, when the country's integration efforts began, Nawab had to leave his empire and joined the Indian republic in 1948. According to records, even after losing his empire Nizam had 9 wives, 42 keeps, 200 children and 300 servants.

After the merger of Hyderabad in Indian federation the sources of income of Nizam keep on decreasing and a day came when the Nizam family had to leave India. As per the secret information the descendants of Nawab are living anonymously in a small flat in Turkey.