List of the diseases caused due to Food Poisoning 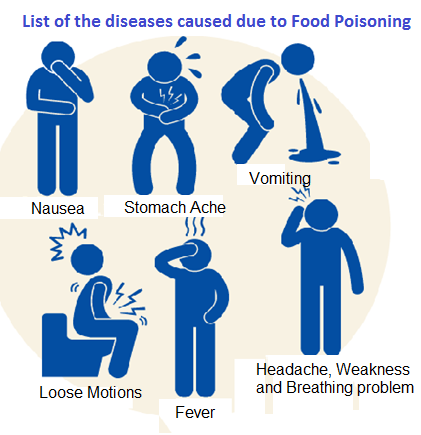 List of diseases caused due to Food Poisoning
1. Fusarium toxin: A fungus called Fuserum pollutes the crops of the jowar.
The toxic substance called T-2 is found in this crop. This toxic substance produces 'Bowel syndrome'. It causes tumour in animal’s brain and heart disease.
2. Epidemic Dropsy: Mixing the seeds of argimon oil into the mustard oil produces Eczema disease. The seeds of argimon have chemicals called sangunirin, which is the cause of the disease dropsy. Symptoms include swelling in legs, diarrhoea, breathing problem, heart failure and person may die also.

Do you know which Human Body Organs can be donated
3. Neurolathyrism: By mixing Khesari Dal in food pulses, or its dough in gram flour etc, the toxic substance present in the khesari dal called Neurotoxin BOAA produces complexity in our body. If this adulterated pulse is eaten, it causes a severe impact on the nervous system. Initially, due to weakness, man starts walking with a wood stick, when the weakness increases, two wood sticks have to be used while walking. Eventually, he or she is bound to move on the lash.
4. Endemic Ascites: If in Chena crop, roe seeds are mixed, it results in the spread of a chemical called 'pyrolyzideen' which is harmful for health. Panecka Millari that is roe seeds grow with chena food grains. During harvesting it got mixed in the crop. These toxic substances cause heavy damage to the liver.
5. Aflatoxin: Fungus Aspergillus produces toxin namely aflatoxin which causes disease in the body and is produced in the wet soil, crop like groundnut, maize, jowar, wheat, rice etc. Toxic substances present in it cause heavy damage to the liver. Its complexity also produces liver cancer.
We have understood from the above article that what is food poisoning, how it is caused, what type of diseases may occur, symptoms etc.

How many types of Kidney Stones are formed in Human Body