Nelson Mandela International Day 2021: It is observed on 18 July worldwide to remind the contributions of Mandela to the culture of peace, human right, reconciliation and freedom. Let us read in detail about the day.

"It is easy to break down and destroy. The heroes are those who make peace and build." - Nelson Mandela

Nelson Mandela International Day 2021:  This year the focus will be on two critical intersecting challenges that are being faced by South Africa and several other countries for food security and cultures of lawlessness. No doubt the COVID-19 pandemic has deepened the issues of poverty and inequality.

Nelson Mandela was born on 18 July, 1918 in South Africa. He was a great politician, revolutionary, and philanthropist. On 18 July, Nelson Mandela's birthday falls so, this day is celebrated as Nelson Mandela International Day. It is also known as Mandela Day.

The day is observed to “Take Action; Inspire Change; Make Every Day a Mandela Day.” Everywhere people should take responsibility for making the world a better place. For almost 67 years, he fought against social justice. Do you know that since 2009, on 18 July it has been an official United Nations holiday?

“Our march to freedom is irreversible. We must not allow fear to stand in our way.”

He had devoted his life to the service of humanity; as a human rights lawyer, a prisoner of conscience, an international peacemaker, and the first democratically elected president of a free South Africa. He proved that nothing is impossible only determination is required to fulfill the dreams.

Nelson Mandela was born Nelson Rolihlahla Mandela in Transkei, South Africa on 18 July, 1918. His mother was Nonqaphi Nosekeni and father Nkosi Mphakanyiswa Gadla Mandela. When his father died he was raised by Jongintaba, the regent of the Tembu. . There he always listened to the stories about the valour of the ancestors who struggled for freedom. For his B. A Degree, he went to the University College of Fort Hare. But, he didn't receive his degree due to the protest of students that he had joined. As a result, he was expelled from the college. Then, he went back to the Great Place at Mqhekezweni where the king threatened him that if he will not complete his degree, he will going to arrange a marriage for him.

“History will judge us by the difference we make in the everyday lives of children.”

Due to this, he ran to Johannesburg, where he worked as a mine security officer. Eventually, he had completed his studies through the University of South Africa and received his B.A degree. No doubt, he is one of the most well-known anti-apartheid activists in South Africa.

In 1944, he joined the African National Congress party and later he became the leader in a number of peaceful protests against the white minority’s regime in South Africa.

From 1964 to 1982, he was imprisoned in Robben Island, Cape Town in South Africa for leading the liberation movement against apartheid and for his stance on the human right to live in freedom. His prisoner number was 466.

“It always seems impossible until it's done.”

“Money won’t create success, the freedom to make it will.”

Mandela formed the Elders, an independent group of global leaders in 2007 who offer their influence and experience to support peacebuilding, help address major human suffering causes and promote the shared interests of humanity. He died in 2013.

The theme for 2021 Nelson Mandela International Day is "One Hand Can Feed Another." 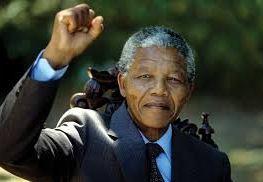 On 18 July, 2009, the first Mandela Day was launched in New York. The United Nations General Assembly adopted a resolution on 10 November, 2009 declaring 18 July as "Nelson Mandela International Day". This day marks the contribution to peace through his active involvement in resolving conflicts, promoting human rights, international democracy, and reconciliation, and addressing racial issues.

“Education is the most powerful weapon which you can use to change the world.”

Mandela provides service to others and always wants to create a better world for everyone. So, on this day if people find injustice in the neighbourhood, city, or state they do everything to alleviate the problem. Work in soup kitchens, marched with protesters, volunteer in local organisations, and work to help bring about civil liberties for everyone. Inspire change, and make every day a celebration of Mandela Day. People work for others and want to improve the lives of people around them. They will do this by volunteering or taking part in protests.

“After climbing a great hill, one only finds that there are many more hills to climb.”

This day provides a global call for people to recognise their ability and have a positive effect on others around them. People also inspire others about the values that Mandela shared like democracy, freedom, diversity, reconciliation, and respect. To promote Nelson Mandela Day, many people and organisations around the world take part in several activities. These activities are volunteering, sport, art, education, music, and culture. This day also celebrates a campaign known as “46664”, in reference to Nelson Mandela’s Robben Island prison number. The campaign was originally launched to raise awareness about HIV/AIDS. In 1995 and 1999 Children's Fund and the Nelson Mandela Foundation were established.

“I learned that courage was not the absence of fear, but the triumph over it. The brave man is not he who does not feel afraid, but he who conquers that fear.”

“We can change the world and make it a better place. It is in your hands to make a difference.”

When was Children's Fund and Nelson Mandela Foundation established?

In 1995 and 1999 Children's Fund and the Nelson Mandela Foundation were established.

What is the theme of Nelson Mandela International Day 2021?

The theme for Nelson Mandela International Day 2021 is "One Hand Can Feed Another."

Who said, “History will judge us by the difference we make in the everyday lives of children.”?

In the given question the famous saying “History will judge us by the difference we make in the everyday lives of children" is of Nelson Mandela.