Optical Illusion: Picture Reveals If You Are A Romantic or Not: What Do You See First?

Optical Illusion: What You See First? Optical Illusions have been said to bring out the personality of anyone who sees them. These brainteasers have a special way of getting out such personality traits which people do not realise explicitly. The things you see in optical illusion pictures are different from what your mind perceives which is why it causes the illusion. In today’s optical illusion picture, you will need to notice what you saw first, which may reveal your romantic side. Check the pictures below and tell us what you saw first? A skull, the boy or the girl.

Optical Illusion: What You See First Reveals How You Treat Your Better Half

Optical Illusion: Spot the hidden heart among elephants in the picture in 18 seconds!

Optical Illusion: Spot 6 Hidden Animals in 6 Seconds In This Picture To Win The Global Challenge

Today’s optical illusion picture may seem creepy at first but once you actually see it, you realise that there are a boy and a girl sitting in a dark place.

The picture was first shared by Your Tango and has been circulating the internet ever since. What does it have to say about your romantic relationships? Let us know below: 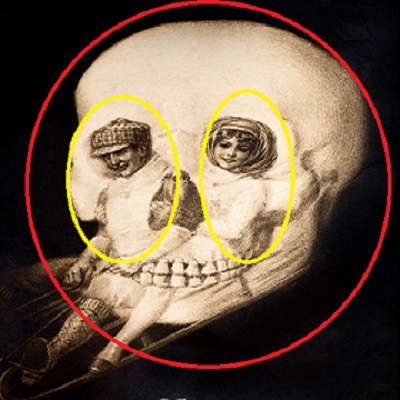 You have a child-like enthusiasm for the romantic relationships you have. Although you have an issue accepting it in reality, you have a girl-like passion for romance. “You give off a sense that if romance ever found you in real life, you might ignore it because it could never pass muster", an expert says.

Optical Illusion: Global Challenge- Can You Spot The Hidden Lamp In This Image Before 19 Seconds?

You in a way have a child-like desire to have a fairytale ending.

Optical Illusion: Find the hidden mouse in the picture in 15 seconds to break the global record!

Optical Illusion: Spot The Queen In The Image In 9 Seconds- It Is Not Where You See!

People who see the girl first believe the prospect of romance too much. They are in love with the idea of love but when it comes to actual life, it creates confusion for them due to their high expectations. As per an expert, “You are out and proud about your romantic streak, but sometimes the people around you might get confused and think that love, dating, and mating is all that actually interests you.”

In case you saw skull first, people think of you to be someone who is disinterested in love and romance. As per the expert, "the people around you see that you're intelligent and realistic, and they assume this means that you don't engage in things that the average person might call frivolity."

These people involve in romance when they find the situation right. It is very private to them.

So, now you know if you are a truly romantic person or not. Take a look at these optical illusions too: