Optical Illusion: Is It A Glitch In The Matrix Or Something Else?

Is there something wrong with the wheel or is your brain playing tricks on you? This optical illusion will blow your mind.

Optical Illusions are visual phenomena where our brain perceives something different from reality.

They can fool us into thinking things aren't really there or they can trick our eyes into seeing things that don't exist.

In ancient times, people alluded to these illusions as witchcraft, demons, or evil spirits. Later, scientists discovered that our brains play tricks on us and it all happens because of different perceptions.

Optical Illusions are often created using simple shapes such as triangles, circles, squares, rectangles, etc. These shapes are then arranged in various ways to create the illusion.

The goal is to see what isn't really there or hiding in plain sight.

Optical Illusion: Is It A Glitch In The Matrix Or Something Else?

We have all seen the movie Matrix, which has dominated pop culture ever since its release. After the movie’s release, whenever people capture something strange, they attribute it to a glitch in the matrix.

We too have a glitch in the matrix for you. And this optical illusion will blow your mind.

Look at the image below. 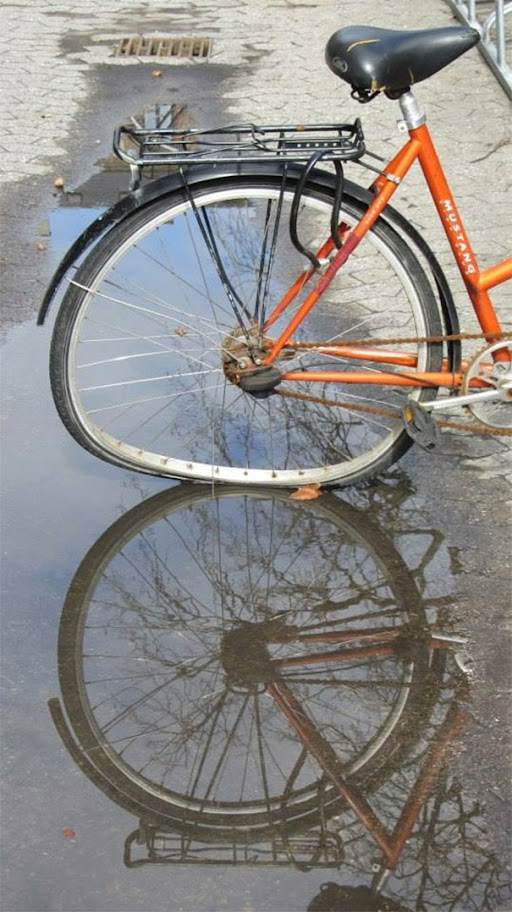 You must be thinking: What? How could this be?

As you can see, in the image above, the hind tyre of the bicycle looks punctured; however, at the same time, in its reflection in the puddle, the tyre looks just fine.

How can this happen?

Are we really living in a matrix? Is our world run by machines and AI?

What answer did you come up with?

Do you believe in the Matrix now? Or do you perhaps think that the picture is edited?

We assure you that the picture is legit.

Think again. What could cause the tyre to look punctured?

Have you come up with an answer yet?

If yes, then great.

If not, then do not trouble yourself anymore.

We are going to reveal the answer now.

Yes, there is a perfectly reasonable scientific explanation behind this illusion.

Keep reading to find out what caused the illusion.

Matrix fans, we are really sorry to burst your bubble.

We are not living in a matrix. The world is not run by evil machines.

Think back to the science classes you took at school.

You must have read about this scientific phenomenon called “Refraction of Light.”

It's okay if you have forgotten about it. We will refresh your memory.

What is the Refraction of Light?

When a ray of light passes from one medium to another with different densities, it bends i.e. changes directions. This is called refraction.

This is a natural phenomenon and even our eyes work on the principle of refraction. Well, this phenomenon is at work here and is the reason behind this optical illusion.

You can experiment with the principle of refraction even at your home. Take a transparent glass and fill half of it with water. Put a pencil in the half-full/empty glass of water and observe it from a distance.

You will find that the pencil appears to be crooked or bent at an angle.

Well, we hope this optical illusion helped you learn something new.

Kitty, Kitty Where Are You? Find The Hiding Cat In This Optical Illusion.

Optical Illusion: Can you Spot the House Without a Door in 9 Seconds?


Get the latest General Knowledge and Current Affairs from all over India and world for all competitive exams.