Jagran Josh takes a look at the records held by one of the greatest opening batsmen of all time, Sunil Gavaskar, on his birthday eve.

Be it playing on uncovered pitches or without a helmet, Sunil Gavaskar dominated every condition during his legendary career. On the birthday eve of Little Master, let us have a look at the records made by him.

1- Sunil Gavaskar was the first cricketer who scored 10,000 Test runs, a feat that was unimaginable at that time.

2- He holds the record for the highest runs (774) scored in a series by a debutant cricketer.

3- He also holds the record of scoring the maximum number of runs (2,749) and centuries (13) against the West Indies.

4- He is the only cricketer to score 4 consecutive centuries at 2 venues-- Port of Spain & Wankhede Stadium.

5- He is the only cricketer with 58 Test century partnerships with 18 different players.

6- He is a joint holder of the record for scoring centuries in both innings of a Test Match on three occasions along with Australia's Ricky Ponting and David Warner.

7- He is the first Indian fielder (excluding wicket-keepers) to bag over a hundred catches in Test cricket.

8- He is the first Indian cricketer to carry his bat in test cricket and scored 127 not out in the Faisalabad Test in the year 1983, a record that was later matched by Rahul Dravid and Cheteshwar Pujara.

9- He held the record for the highest number of Test centuries (34) that was bettered by Sachin Tendulkar in 2005. 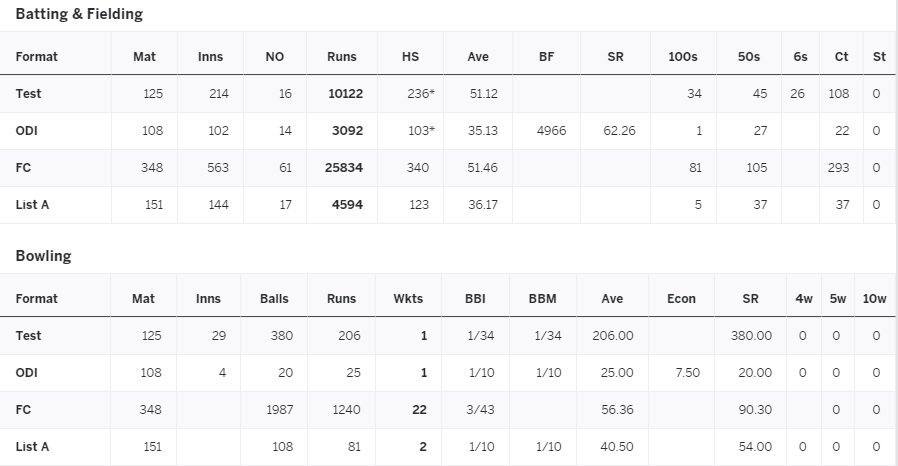 Sunil Gavaskar as a Referee

At present, Sunil Manohar Gavaskar is a cricket commentator. He is also a recipient of the Indian civilian honours of the Padma Shri and the Padma Bhushan. He was inducted into the ICC Cricket Hall of Fame in 2009.