10 deadliest Tsunamis in the history of the world

Tsunami is no pleasant name or happening. It has killed many people and damaged many places in the history. The waves that swallow are most feared and have the potential to change the course of history. Take a look at the deadliest tsunamis of the world below. 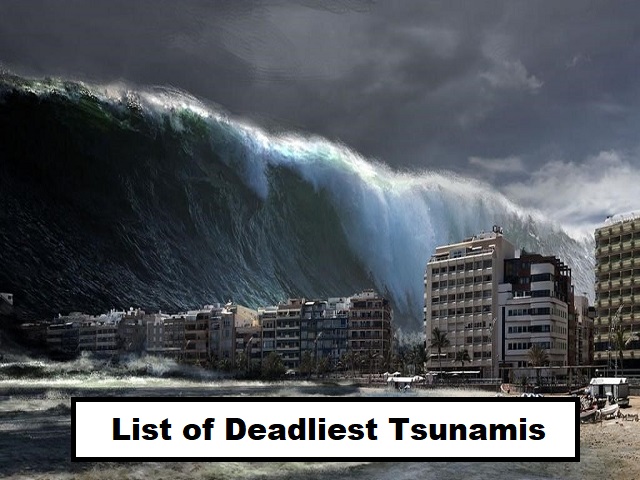 Tsunamis that hit the world

A tsunami is a series of waves that is caused by the displacement of large volumes of water generally in an ocean, sea or a large lake. The reason for a tsunami can be anything, including earthquakes, volcanic eruptions or underwater explosions. Tsunamis no wonder can cause a lot of destruction and it has now been evidently recorded as well. The tsunami with the highest runup was the 1958 Lituya Bay megatsunami, which had a record height of 524 m or 1,719 feet. Take a look at the various tsunamis here that changed human history.

It was a 9.1 magnitude earthquake that hit the coast of Sumatra and occured at the depth of 30 km. This fault zone that caused the tsunami was roughly 1300 km long.

The ensuing Tsunami was a tall one. It was almost 50 metres and reached 5 km inland near Meubolah, Sumatra. This tsunami is one of the most widely recorded waves of all time. This tsunami registered a loss of almost 10 billion US$ with almost 2,30,000 people dead.

The earthquake of 7.8 to 8.3 magnitude and a maximum Mercalli intensity of XI caused the displacement of 90 million tonnes of water into the narrow inlet of Lituya Bay in Alaska. This resulted in a megatsunami which was caused majorly due to the earthquake in Fairweather Fault.

The impact of the wave was heard 80 kilometres from the place and this sudden megatsunami resulted in a maximum elevation of 1720 feet at the entrance of Gilbert inlet. This is the deadliest tsunami recorded till date on Earth.

A magnitude 8.5 earthquake caused a series of three huge waves that hit the towns of the west coast of Portugal and south of Spain. It reached upto 30 metres high in some places. This tsunami affected the waves even in Carlisle Bay in Barbados where the people reported as high as 1.5 metres waves. The tsunami killed 60,000 people in Portugal, Spain and Morocco.

It is the strongest earthquake that has ever been recorded in North America. It struck Alaska's Prince William Sound almost 74 miles southeast of Anchorage.

It was a 9.2 magnitude earthquake and it wobbled Seattle's Space Needle 1200 miles afar too. This earthquake broke all water, gas pipelines etc and continued for 4 long minutes. As soon as the tremors ended, water swelled and resulted in a series of tsunamis giving the locals less time to prepare for evacuation. The massive wave crushed the coastal villages and erased 1/3rd of the population.

Japan was hit by a tsunami travelling 800 km per hour with 10 m high waves that swept its east coast killing more than 18000 people. The 9.0 magnitude earthquake resulted in this tsunami that had reached the depths upto 24.4 km making it the fourth largest earthquake that was ever recorded. Approximately 452,000 people were relocated to shelters, and still remain displaced from their destroyed homes. Japan took more than 5 years to recover the 235 billion $ damages.

This tsunami was due to the explosion of the Krakatau caldera volcano. Many waves were generated which were as high as 37 metres and were propagated by the violent eruptions and demolished the towns of Anjer and Merak. It was reported that the sea receded a Bombay shore and killed one person in Sri Lanka as well. A total of 40,000 people died in this event with 2000 deaths owing to the volcanic eruptions.

This tsunami was also known as Boxing Day Tsunami and it hit the Indian ocean.

The earthquake was caused by a rupture along the fault between the Burma Plate and the Indian Plate. The waves reached as high as 30 metres after heading inland.

This one is counted as the deadliest of all tsunamis as it killed almost 227,898 people in 14 countries. The effect was felt in  Aceh (Indonesia), Sri Lanka, Tamil Nadu (India) and Khao Lak (Thailand). The earthquake even generated tremors in Alaska.

A landslide caused 50 million cubic metres of water overtopping a dam in a wave as high as 250 metres causing massive flooding and destruction to Piave Valley below the dam .

A 260 million cubic meters of rock broke off from the top of Monte Toc, on the border between Veneto and Friuli Venezia Giulia and fell into the reservoir of the dam. This event killed 2000 people which was almost 1/3rd of the population of Longrone.

The earthquake of magnitude 8.4 caused the sea waves as high as 25 metres in the Pacific hammering into Kyushu, Shikoku and Honshu. They also damaged Osaka. A total of nearly 30,000 buildings were damaged and affected while 30,000 people were killed.

This tsunami happened after an estimated magnitude of 7.6 earthquake hit the coast of Sanriku, Japan. It was reported at Shirahama to have reached a height of 38.2 metres and damaged more than 11,000 homes and killed 22,000 people. It also hit the coast of China killing 4000 people there.