List of Welfare Programmes by the Government of India

Pradhan Mantri Gram Sadak Yojana, Rashtriya Swasthya Bima Yojana, Antyodaya Anna Yojna, and Bharat Nirman, are some important programmes of government of India to upgrade the welfare of the poor citizens of the country. 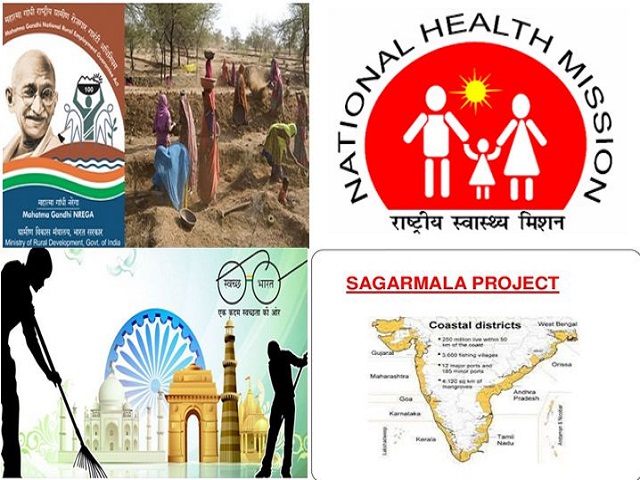 The government of India launched so many welfare programmes for the holistic development of the country. Some are Antyodaya Anna Yojna, National Gramin Awaas Mission (formerly Indira Awas Yojna), Bharat Nirman, etc. all these programmes are launched to alleviate poverty and generate employment so that economy can grow rapidly in this competitive world.

According to a general survey done by the National Sample Survey Organization (NSSO), 58% of total employment exists in the rural sector and only 38% in the urban sector of our country.

Different Progrmmaes of Government of India are given below:

Valmiki Ambedkar Awas Yojana (VAMBAY): The VAMBAY launched in December 2001 facilitates the construction and upgradation of dwelling units for the slum dwellers and provides a healthy and enabling urban environment through community toilets under Nirmal Bharat Abhiyan, a component of the scheme. The Central Government provides a subsidy of 50 percent, the balance 50 percent being arranged by the State Government.

Swarna Jayanti Shahari Rozgar Yojana (SJSRY): The Urban Self Employment Programme and the Urban Wage Employment Programme are the two special components of the SJSRY, which, in December 1997, substituted for various extant programmers implemented for urban poverty alleviation. SJSRY is funded on 75:25 basis between the Centre and the States.

Antyodaya Anna Yojana (AAY): AAY launched in December 2000 provides food grains at a highly subsidized rate of Rs.2.00 per kg for wheat and Rs.3.00 per kg for the rice to the poor families under the Targeted Public Distribution System (TPDS). The scale of the issue, which was initially 25 kg per family per month, was increased to 35 kg per family per month from April 1, 2002. The scheme initially for one crore families was expanded in June 2003 by adding another 50 lakh BPL families.

Pradhan Mantri Gram Sadak Yojana (PMGSY): The PMGSY, launched in December 2000 as a 100 percent Centrally Sponsored Scheme, aims at providing rural connectivity to unconnected habitations with a population of 500 persons or more in the rural areas by the end of the Tenth Plan period. Augmenting and modernising rural roads has been included as an item of the NCMP. The programme is funded mainly from the accruals of diesel cess in the Central Road Fund. In addition, support of the multi-lateral funding agencies and the domestic financial institutions are being obtained to meet the financial requirements of the programme.

Prime Minister’s Rozgar Yojana (PMRY): PMRY started in 1993 with the objective of making available self-employment opportunities to the educated unemployed youth by assisting them in setting up any economically viable activity. While the REGP is implemented in the rural areas and small towns (population up to 20,000) for setting up village industries without any cap on income, educational qualification or age of the beneficiary, PMRY is meant for educated unemployed youth with family income of up to Rs.40, 000 per annum, in both urban and rural areas, for engaging in any economically viable activity.

Sampoorna Grameen Rozgar Yojana (SGRY): SGRY, launched in 2001, aims at providing additional wage employment in all rural areas and thereby food security and improve nutritional levels. The SGRY is open to all rural poor who are in need of wage employment and desire to do manual and unskilled work around the village/habitat. The programme is implemented through the Panchayati Raj Institutions (PRIs).

Swaranjayanti Gram Swarozgar Yojana (SGSY): SGSY, launched in April 1999, aims at bringing the assisted poor families (Swarozgaris) above the poverty line by organizing them into Self Help Groups (SHGs) through a mix of Bank credit and Government subsidy.

Jawahar Rozgar Yojana (JRY): JRY was launched as Centrally Sponsored Scheme on 1st April 1989 by merging National Rural Employment Programme (NREP) and Rural Landless Employment Guarantee Programme (RLEGP). Its main objective was the generation of additional gainful employment for the unemployed and under-employed people in rural areas through the creation of rural economic infrastructure, community, and social assets with the aim of improving the quality of life of the rural poor.

Integrated Rural Development Programme: The Integrated Rural Development Programme (IRDP) was started in 1980-81 in all blocks of the country and continued as a major self-employment scheme till April 1, 1999. Then, it was restructured as the Swarnjayanti Gram Swarozgar Yojana (SGSY) which aimed at self-employment of the rural poor. The objective will be achieved through the acquisition of productive assets or appropriate skills that would generate an additional income on a sustained basis to enable them to cross the poverty line.

In respect of the Hill States (North-East, Sikkim, Himachal Pradesh, Jammu & Kashmir, Uttaranchal) and the Desert Areas (as identified in the Desert Development Programme) as well as the Tribal (Schedule V) areas, the objective would be to connect Habitations with a population of 250 persons and above.

Subsidy towards capital expenditure to the tune of 90% is being provided, through Rural Electrification Corporation Limited (REC), which is a nodal agency for implementation of the scheme. Electrification of un-electrified Below Poverty Line (BPL) households is being financed with 100% capital subsidy @ Rs.2200/- per connection in all rural habitations.

Rashtriya Swasthya Bima Yojana: RSBY has been launched by the Ministry of Labour and Employment, Government of India to provide health insurance coverage for Below Poverty Line (BPL) families. The objective of RSBY is to provide protection to BPL households from financial liabilities arising out of health shocks that involve hospitalization.

Beneficiaries under RSBY are entitled to hospitalization coverage up to Rs. 30,000/- for most of the diseases that require hospitalization. The government has even fixed the package rates for the hospitals for a large number of interventions. Pre-existing conditions are covered from day one and there is no age limit.

Coverage extends to five members of the family which includes the head of household, spouse and up to three dependents. Beneficiaries need to pay only Rs. 30/- as registration fee while Central and State Government pays the premium to the insurer selected by the State Government on the basis of competitive bidding.